His Christian faith is important to astronaut Jeff Williams, who wouldn’t dream of leaving home — or earth, for that matter — without it.

Williams, a member of Gloria Dei Lutheran Church, Houston, says he plans to stay in touch with his congregatio 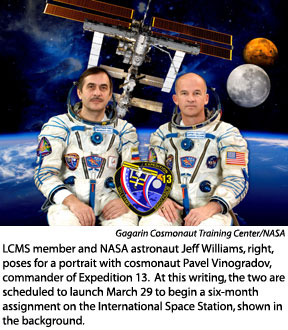 n even though he’ll be off the planet — orbiting 250 miles above the earth during a six-month stint aboard the International Space Station.

In fact, if Williams has his way — and NASA technicians can make it happen — the Gloria Dei lay minister will “join” fellow congregation members in a July 2 worship service.  Williams, still aboard the space station, will receive only audio from the service, but if all goes well the congregation will be able to see and hear Williams via a live video feed from space.

The congregation is considering continuing its theme of the past year for that day’s worship service: “Serving Beyond.”

In a telephone interview from the Gagarin Cosmonaut Training Center in Star City, Russia, just outside Moscow, Williams told Reporter that he’s not sure yet what he’ll say to Gloria Dei members in July.  He will probably “just reflect on the grandeur” of the view, “being able to see the work of our Creator” and “the magnificence of His grace that we find in His Son, Jesus Christ.”

Williams, 48, began his service at the Lyndon B. Johnson Space Center in Houston on assignment with the U.S. Army in 1987, the year he and his wife, Anna-Marie, became Christians.  They joined Gloria Dei the following year and remained members even during Army relocations from 1992 to 1996.

Williams, an Army colonel, will serve as the expedition’s flight engineer and NASA science officer.  He described the space station, in orbit since 1998, as “fairly roomy,” with about as much livable space as a three-bedroom house.  He expects to have relatively normal work days, with more free time on weekends, just like home.

And, just like home, he said he expects that “prayer will be part of my daily regimen up there,” with more time for devotions on weekends.  He is taking along plenty of reading material — including Christian and devotional works —  mostly in space-saving electronic form that he can read via computer.  But he is taking a printed Bible.

Williams said he doesn’t really feel any closer to God while exploring the “heavens,” but says space exploration “intensifies and magnifies the reality of the faith I already have.”

It also “intensifies the awe and wonder” of what God has done for mankind, he said.  “It’s a very humbling experience to view the earth” — and everything it represents — “and to begin to imagine the creative power of our God.”

While on the space station, Williams and Vinogradov will take part in three “spacewalks” outside the spacecraft, a thrill Williams has had once before, while on the 10-day “Atlantis” STS 101 shuttle mission in 2000.

“It’s awesome — it’s the highlight of the whole experience,” he said.

He and most other astronauts “don’t think about the dangers” of their profession, he says, since they have spent lifetimes in military aviation and “this is just an extension of that.”

And don’t call him a hero, a label that makes him uncomfortable.  “I consider [space travel] my vocation, my calling,” he said.  “It’s what God has equipped me to do.”

Williams is looking forward to the expedition and said he hopes he’ll be able to speak to his fellow congregation members from space.  He says he feels “a sense of duty and obligation to bring the experience to people.  It’s such a rare thing to do what we do, it would be selfish of me not to share it.”

For their part, Gloria Dei members will be praying — and celebrating — along with Williams.  They’re planning a congregation-wide “launch party” on March 29, complete with a big-screen broadcast of the live launch from Kazakhstan, compliments of the Johnson Space Center across the street.

About a fifth of the congregation’s 3,200 members have connections to NASA, including several astronauts, according to Vince Parks, executive director of ministry.  Parks described Williams as a “spiritual pillar” of the congregation, with an unshakable faith.

That faith, Williams is quick to note, was planted — and continues to be nurtured — by his wife, Anna-Marie, who came to faith first and witnessed to him.

“She stimulated me to start studying the Bible,” he said.  “Her faith is an inspiration to me, always has been.”

Likewise, the real “courage” in space travel belongs to the astronauts’ spouses, he says.  Anna-Marie has to not only go through the six-month flight and associated separation and stresses, but already has endured more than three years of his training, including her husband’s 16 deployments to Russia.

The experience, he says, has been “a real sacrifice for the entire family — that’s where the real steadfastness and fortitude and courage lie.”