Wet conditions from intermittent rain and a new parade route didn’t dampen the spirits of an estimated 100,000-plus people — including several dozen under the Lutherans For Life (LFL) banner — who gathered for this year’s “March for Life” Jan. 23 in Washington, D.C.

Dennis Di Mauro, president of LFL’s Northern Virginia chapter, said the weather “and a confusing new starting point and route” for the organizing rally and march may have discouraged some, but “spirits of the marchers were energized b 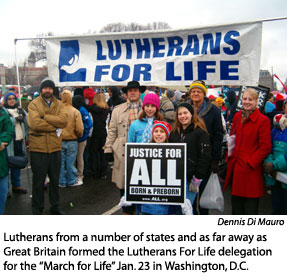 y the experience,” which included remarks via phone from President George W. Bush.  “As always, it was great to see so many people from all walks of life advocating life.”

Di Mauro said that the Lutheran contingency included people “with a range in age and backgrounds” from a number of states and the United Kingdom.

Each year, the march is held to mark the anniversary of the 1973 U.S. Supreme Court’s Roe v. Wade decision that legalized abortion in the United States.

“You believe, as I do,” Bush told the throng this year, “that every human life has value, that the strong have a duty to protect the weak, and that the self-evident truths of the Declaration of Independence apply to everyone, not just to those considered healthy or wanted or convenient.”

Bush drew applause when he noted that “these principles call us to defend the sick and the dying, persons with disabilities and birth defects, all who are weak and vulnerable, especially unborn children.”

The president also spoke of “good progress … we’re making … in defending these principles.”

“I want to thank you all for getting [the] ban on partial-birth abortion to my desk, a bill I was proud to sign — and a law which we are going to defend, and are defending vigorously in our courts,” he said.

“I also renew my call for Congress to ban all forms of human cloning,” Bush continued.  “Because human life is a gift from our Creator and should never be used as a means to an end, we will not sanction the creation of life only to destroy it.”

“By changing laws we can change our culture,” Bush said. “And your persistence and prayers … are making a real difference.”

Media reports on the march mentioned the “heightened significance” this year as Bush’s nomination of Judge Samuel Alito to the U.S. Supreme Court was being considered for confirmation.

“Participants were buoyed by the prospect that an additional pro-life justice — Alito — [might] soon be confirmed,” Di Mauro told Reporter. He said that confirmation “is pivotal, since it will create a 5-4 majority on the court for the partial-birth abortion ban which will eventually head back to the Supreme Court.  That decision will open the floodgates to further bans on abortions in the second and third trimesters.”

Ed Szeto, director of Outreach for National Lutherans For Life, who was also at the march and rally, said, “It is important for Lutherans to participate and be witnesses along with other church bodies at the march. It serves as a wonderful witness to the entire nation of what we believe and how life is precious and valuable.”

The day’s activities for the Lutherans began with a worship service at Immanuel Lutheran Church, Alexandria, Va.

Immanuel’s pastor, Rev. Christopher Esget, in his homily for that service noted that green is the liturgical color for use on Jan. 22, the day of the abortion-decision anniversary.

“But perhaps every Jan. 22 … we should strip the church of everything festive, and vest all in black, for a day of mourning,” he suggested.  “We would have to toll the bells about 45,951,133 times to account for all the helpless, defenseless children slaughtered in America by the reprehensible evil that is abortion.”

Esget also suggested that the abortion-decision anniversary might be commemorated on the same day “we remember the Slaughter of the Holy Innocents, which recounts Herod’s cruelty in destroying the children of Bethlehem.”

“The slaughter of the holy innocents that continues in our day is not something that we can simply talk about, lamenting it among ourselves,” Esget said.

He reminded the worshipers that the Small Catechism explanation to the Fifth Commandment “calls us to help and befriend our neighbor in every bodily need.

“What bodily need could be greater than those condemned to die simply because they are deemed an inconvenience, a mere byproduct of lustful desire to be discarded like trash, rather than the human beings whom God has given life?”

Esget challenged the worshipers to remember that “many [abortion] proponents are misguided by false and misleading philosophies.  In naming the crime of abortion as sin,” he said, “we recognize that we also are sinners.  Even if we could end this heinous evil today, we would not put an end to sin.  We would not make America righteous or godly.  For none of us is righteous. … Our only righteousness is the righteousness of Christ, freely given to us wretched sinners, freely marked on our foreheads with the cross, freely poured over our heads in Baptism, freely poured into our mouths with the wine that makes glad the heart of man, the wine of our Lord’s innocent blood.”

He also reminded those gathered that the Epistle for the day “should put us in the proper mind: ‘Do not be wise in your own eyes,'” he said, quoting St. Paul.  “‘Repay no one evil for evil.'”

“Our message is not one of first being against something, but of being for, being proponents of God’s love, grace, and peace,” Esget said.

“Come and receive His forgiveness, given freely to you,” he said.  “Then go in peace, proclaiming by your words and demeanor the love of God.  For not by changing laws, but by changing hearts, will this great scourge be truly ended.”

After the service, Esget joined the Lutheran group that boarded a Metro train to Washington for the rally and march, with many of them returning to Immanuel afterward for a pizza dinner.

Noting that this was the first time he had participated in the rally and march, Esget said, “I was not expecting to have such strong emotions.  To see so many people supporting the gift of life and asking the government to protect all human beings, not only those we find convenient or useful — and doing so in a peaceful and loving way — was very moving.  I wish that everyone, including our whole congregation, would have been there.”