LCMS World Relief/Human Care and its Baltimore-based partner, Lutheran World Relief, are providing emergency aid to victims of a 6.3-magnitude earthquake that struck the island of Java, in central Indonesia, May 27. 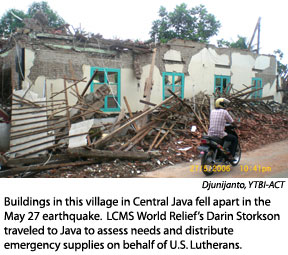 0,000 without homes in this predominantly Muslim nation, according to news reports as this Reporter was going to press.

Among buildings damaged by the temblor were at least three Lutheran churches, but details were not available at press time.

“Both domestic and international relief supplies have begun to arrive in the affected area,” said Darin Storkson, Asia regional director for LCMS World Relief/Human Care, in a May 30 e-mail.  “Health, shelter, and water supply are the priority needs.”

Storkson, who is based in the Indonesian capital of Jakarta but traveled to quake-affected areas May 30, has been working with local Lutheran and Christian groups — relief partners of LCMS World Relief/Human Care — to assess needs and distribute emergency supplies.

“Affected households have lost their homes and belongings, and many households experienced one or more deaths and, of course, many injuries,” Storkson said in the e-mail.  “Owing to universal brick and cinderblock construction, towns near the epicenter experienced near complete destruction of all homes.  That fact, combined with continuing aftershocks, has left most families living outside on salvaged mattresses.

“As a result, initial needs to which we are responding include basic household supplies, dry foodstuffs, and drinking water,” Storkson continued.  “We are also exploring the need for healthcare support of a specific hospital and for temporary shelter materials.”

In the e-mail, Storkson admitted to having “slept two hours in the last 48.” 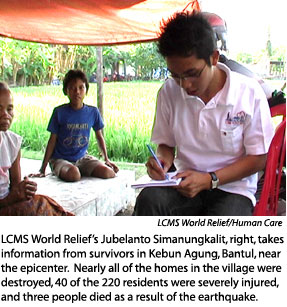 LCMS World Relief had so far been distributed, “but we’re just getting warmed up,” he added.

He said the Synod’s relief agency “is proud to be on the ground, shoulder-to-shoulder with and working through our Lutheran brothers, sisters, and partners in Indonesia as we jointly reach out in Christian mercy to those in need, including several Lutheran congregations.”

He asked U.S. Lutherans to pray for victims and for caregivers in Indonesia.

LWR, which receives funding from LCMS World Relief/Human Care and the Evangelical Lutheran Church in America (ELCA), is channelling its emergency funds through Action by Churches Together (ACT), a worldwide network of churches and related agencies that responds to human needs.

Members of ACT “quickly mobilized their staff and resources to address the critical needs of earthquake survivors,” according to an ACT news release.

Also providing emergency funding through ACT is the ELCA’s International Disaster Response, which sent an initial $50,000 for earthquake victims.

To receive alerts about LCMS World Relief disaster-response efforts anywhere in the world, subscribe to Disaster News, a free e-News service of the Synod.  At the LCMS home page (www.lcms.org, click on “e-News” and follow directions on the screen.