Although the weather service reported at least 37 tornado touchdowns in Missouri March 11-13, no LCMS congregation members were known to have been killed or severely injured.

But pastors and congregations in the affected areas are reaching out to help members and neighbors who suffered storm losses. 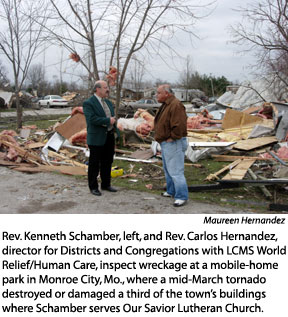 s, and damaged 1,350 other structures, according to media reports.  As weather systems moved across the country over those three days, they spawned more than 100 reported tornadoes — most of them in the Midwest.

In Monroe City, a town west of Hannibal with about 2,500 inhabitants, roughly a third of the buildings were destroyed or damaged when a tornado tore through the middle of town.  Our Savior Lutheran Church’s property there was spared, while a Baptist church down the block from it was leveled.

In Perryville, about 100 miles south of St. Louis, at least two members of Immanuel Lutheran Church lost their homes, and others were reporting tornado damage.

Just north of Perryville, in rural Ste. Genevieve County, LCMS members were coming to the aid of each other and neighbors whose homes were swept away or left tattered by the weekend storms.

Rev. Carlos Hernandez, director for District and Congregations with LCMS World Relief/Human Care, conducted assessment visits to both Monroe City and the Ste. Genevieve area in the week following the storms.

Based on Hernandez’s recommendations, LCMS World Relief/Human Care gave two disaster-relief grants — one for $20,000 to Our Savior, Monroe City, and the other for $10,000 to Holy Cross Lutheran Church, Ste. Genevieve.

As this story was being prepared, Hernandez was ending an assessment of the damage in and around Perryville, and said the congregation there would receive an initial grant of $5,000 from LCMS World Relief/Human Care for disaster-relief work.

On March 15, Hernandez and Rev. Larry Bradt, pastor of the Ste. Genevieve congregation, visited members who pointed out friends and neighbors with major tornado losses — “mostly mobile homes in the middle of a rural neighborhood,” Hernandez explained.

“We saw the remains of homes — foundations, steps, and piles of debris,” he said.

“The whole day was spent going from one area to another, making pastoral visitation rounds to see how everyone was doing,” Hernandez said.

He described Bradt as “a true country parson, visiting his members, their extended families, and others in need.  He not only inquired about their … well-being in his warm, personal, and pastoral manner, but assured them that, with the help of LCMS World Relief/Human Care, they would receive assistance for immediate and transitional needs.”

With everyone they met, Hernandez said he and Bradt left their cards and encouraged people to call them for any needs, “24/7.”

Two days later, Hernandez made the two-and-a-half-hour drive north from St. Louis to East Ely, near Hannibal, where he met Rev. Kenneth Schamber, pastor of Immanuel Lutheran Church there, and rode with him to Monroe City.  Schamber also serves the Monroe City congregation.

When they reached the storm-torn town, Hernandez and Schamber sought out and visited affected parishioners.

They saw that Our Savior member Charles Hawn’s garage and roof were swept away, as was the case at Monica Ludwig’s home.  They talked with Chrissy Wester in front of her severely damaged house, and with Denise Caldwell, whose home was totally lost.  Most members with property losses were staying with relatives or friends while damage assessments or repairs continued.

“Pastor Schamber immediately became involved in the joint relief and long-term recovery efforts of the community,” Hernandez said.  “It was good to see that the pastor and that congregation were coordinating their work with community efforts.”

He said that Schamber especially was interested in Our Savior helping poorer Monroe City residents of trailer parks, which were particularly hard-hit.

On Thursday of the week after the storms hit, President Bush declared disaster status for a number of Missouri counties, including the ones where Hernandez conducted assessments.

To receive alerts about LCMS World Relief disaster-response efforts anywhere in the world, subscribe to Disaster News, a free e-News service of the Synod.  At the LCMS home page, click on “e-News” and follow directions on the screen.