“Not every child in our building necessarily comes to us because we are a Gospel-proclaiming, Christian school, ” says Dina Vendetti, principal of St. John’s Lutheran School, Dover, Del.

“But that’s OK … just give us a month,” Vendetti added with a laugh. 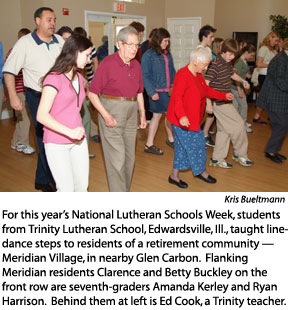 ons at St. John’s “because they appreciated our moral values and liked the program,” she said.  “They initiated some discussion with me regarding how they might fit in — since they were not really ‘churchy’ people.”

Vendetti said she encouraged them to “give us a try.  And they agreed.”

“Things are happening in their lives that can only be explained as the grace of God,” Vendetti said of the family with the two sons.  “I really believe that the whole family is beginning to warm to the idea of Jesus and His love.”

“We always celebrate NLSW as the biggest holiday the school observes, since we’re the only LCMS elementary school in the state,” Vendetti told Reporter during a telephone interview.  She added that does not include Christmas, Easter, and other church festivals, when school is not in session.

And, for NLSW this year, St. John’s School got “tremendous media attention,” Vendetti said, as a result of students raising $2,700 to buy 22 sheep for Bolivia through Heifer Project International.

The St. Louis Post-Dispatch, the city’s daily newspaper, ran a story and a four-column photo of seventh- and eighth-grade students from Trinity Lutheran School, Edwardsville, Ill., at a “senior prom” with residents from Meridian Village, a nearby retirement community — an NLSW service project.

Students from other grade levels at Trinity played table games and visited with senior citizens, and all the students had lunch with residents at the retirement community.

Trinity Principal Paula Nelson said the experiences that day  “raised awareness of our students to the larger community of senior citizens — real people who have some of the same interests and can enjoy some of the same activities as younger people. … And the seniors saw our students as well-mannered [and] respectful.”

“Lutheran Schools Week afforded us this opportunity … to look at a variety of activities and ways to show our uniqueness as Lutheran Christians in the community of Edwardsville,” Nelson said.

At Word of Life Lutheran School, St. Louis, a cameraman from KSDK-TV, the St. Louis NBC-affiliate station, arrived during the school’s NLSW chapel service to tape the presentation of a “Follower of the Lamb” Award from Bethesda Lutheran Homes and Services, Inc., of Watertown, Wis., to Cheryl Bracht, who works with a Word of Life student with Down syndrome.  The TV station would use the tape for playback on several of its newscasts.

To get the attention of local media, Nelson and Word of Life Principal David Robinson worked with the St. Louis-area Lutheran school association.

Reporter asked Terry Schmidt, associate director of School Ministry with LCMS District and Congregational Services, to give other examples of NLSW school activities this year.  So Schmidt sent an e-mail to a number of district education executives around the country, asking them to pass along what they had heard in their areas.

What resulted were almost immediate responses with a host of ideas for schools to mark the week, including:

Schmidt said the story about the two brothers at St. John’s, Dover, “illustrates the mission potential of Lutheran schools,” and the activities of other schools “demonstrate how NLSW gives schools the opportunity to become even more intentional about how they reach out to their communities with the love of Christ.

The theme of this year’s schools week was “Lutheran Schools — A Great Place to Grow,” with the sub-theme of “Developing Disciples.”

Schmidt said that statistics from Lutheran schools indicate that many of them have become their congregations’ primary tool for mission and community outreach.

Earlier this year, he said, Lutheran schools reported that for the previous year, “through the power of the Holy Spirit,” 3,538 children were b

Register your `Ablaze!` contacts on the Web