It’s been a year since Synod President Gerald B. Kieschnick wrote about “one of the greatest stories coming out of New Orleans” after floodwaters from Hurricane Katrina ravaged that city. 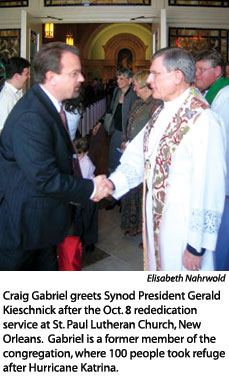 by armed troops of 100 people who took refuge for a week at the badly damaged St. Paul Lutheran Church.  In St. Paul’s neighborhood, looters and snipers threatened residents after the hurricane.

This year, Kieschnick preached for the Oct 8 rededication of St. Paul’s 117-year-old sanctuary, telling 430 worshipers of his “deep concern, respect, and admiration for the people of New Orleans, especially the folks of St. Paul,” as he recounted in an e-mail message to Reporter.  “I encouraged them to give thanks to God for His ever-present help in time of need,” Kieschnick wrote.

The church’s steeple and roof were battered by Katrina’s winds, allowing the hurricane’s rainwater to collect behind the sanctuary’s pressed tin ceiling, which had to be removed.  In all, the congregation incurred more than $2 million in damage, which was covered by insurance.

Rev. David Goodine, St. Paul’s pastor and leader of the group that took refuge there last year, said that physical recovery of the facilities progressed at a rapid pace, compared with other areas of the devastated city.

After spending the first 10 days following their evacuation last year with a son in nearby Houma, Goodine and his wife, Elizabeth, returned to St. Paul’s neighborhood.

“We only lost the month of September at St. Paul,” Goodine recalled, adding that the remediation process started that month.

As repairs got under way upstairs, the congregation held worship services in the church basement.

When workers removed the sanctuary’s tin ceiling, they saw that it hid faded traces of a painted gold filigree border that graced the ceiling in its earliest day.  That border has been restored by a New Orleans artist, and was featured on local television as a pleasant surprise in the city’s slow recovery.

Volunteers to help with recovery efforts poured into the city soon after the hurricane hit.  In November, they started arriving from the LCMS Atlantic and Eastern Districts, along with others “from all over,” as Goodine puts it.

Members from those two districts that had adopted St. Paul during its early recovery also sent supplies for the church’s school, which reopened within two months after the Aug. 29 hurricane.  Goodine said it was the first school to reopen in New Orleans’ East Bank, which includes its central business district and the French Quarter.

“We were very far ahead of the curve,” Goodine said of the recovery process at St. Paul.

He said he thought the “biggest thing” the LCMS volunteers accomplished was “pastoral expertise, at a time when I couldn’t see the forest for the trees.  They were a huge help.”

Goodine’s coordination of the volunteers for St. Paul “became a big job,” which was eased when Randy Rupp, a St. Paul member and a clinical social worker, took on much of that responsibility.  Rupp said he was energized by the volunteers, according to Goodine, at a time when other social workers in the city were “dropping from Katrina fatigue.”

“A gift to the church from the church,” is how Goodine describes the work of Lutheran volunteers, adding that “it was the oddest thing, that they were thanking us for letting them help.”

Although Goodine estimates that St. Paul’s neighborhood is now “90 percent back to normal,” he says businesses have not returned.

“And unfortunately, crime has returned big-time.”

St. Paul had only one member who died in the floodwaters of Katrina.  But many others’ spirits are dying because of those difficult conditions, said Goodine — a challenge both within and for the congregation.

St. Paul now has about 200 baptized members, after counting 450 before Hurricane Katrina.  The church’s school enrolls 170 students, compared with 220 pre-Katrina.

“They’re trying to do their best,” Goodine said of St. Paul’s members.  “We have a great bunch of people.”  They’re fantastic.”