Just like a year ago, this fall’s group of LCMS career and long-term missionaries beginning work in more than two dozen countries includes 30 who are extending, or continuing, their service.

And, just like a year ago, the vast majority of those who have pledged to serve God in cultures different from 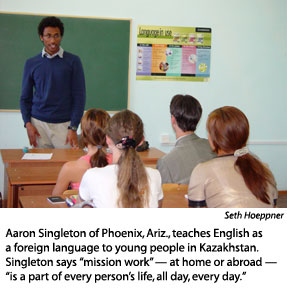 their own fall into two categories: recent college graduates and retirees.

But this year’s group of 98 missionaries is larger, with 28 more people than last year, including 10 “career” missionaries who have accepted “calls” to serve from the Synod’s Board for Mission Services.

Of the total, 88 are “long-term” volunteers, including two couples with young children — an interesting development that’s “not typical of the long-term program,” according to Placement Counselor Erin Alter.

“Long-term” missionaries are those who serve six months or longer, usually a year or more.  They differ from career missionaries in that they are not formally called by the mission board, but instead volunteer to serve, raising their own financial support from sponsoring congregations.

Most teach English as a foreign language, or EFL, and build relationships among the local people, sharing their faith with their newfound friends.  Like their career counterparts, they attend a two-week orientation for new missionaries, typically held in June, which includes worship, Bible study, community-building exercises, EFL training, and classes on topics such as staying healthy, finances and fund raising, moving overseas, maintaining emotional well-being, and talking about Jesus in cross-cultural settings.

Although they are home-schooling their children during their tenure as missionaries, “I expect that a big part of their kids’ education this year won’t be book education, but learning about life in another culture — life as a missionary,” Alter told Reporter.

John and Doris Bowerman are first-time missionaries.  The Bowermans, in their early 60s, have been retired for two years.  They are teaching English in Macau for a year and say their service so far has been “a blessing beyond words.”

After they retired, the couple sold their home in Springdale, Ark., bought an RV, and traveled.

“We thought this would bring satisfaction,” said Doris.  “We did that for … about two years, but soon found ourselves looking at each other and saying ‘Now what?’ “

They talked with their pastor, who suggested they consider mission work.  “We prayed about it, and it was so obvious to both of us that this is what we not only wanted to do, but also what the Lord wanted us to do,” said Doris.  “The joy that has come as a result of yielding to the Spirit has been incredible.  We have tried to share this joy with as many people as will listen.”

Nearly half of the new missionaries — 47 of them — are serving for the first time, and Alter encourages others to think about whether or not God might be calling them to such service.  (Click here for a related story.)

“Now is the time of year when we’re getting new opportunities from [missionaries and partner churches on] the field — who they need and how many they need,” Alter said.  “So this is really the time to start thinking and praying about whether God is moving you to serve as a missionary next year.”

Alter says “all different types of people” are needed to do a variety of tasks — from teaching English, to doing agricultural work, to serving a medical ministry.

For more information about missionary service, visit the Web site www.lcmsworldmission.org/service or contact an LCMS World Mission placement counselor at (800) 433-3954 or mission.recruitment@lcms.org.