Churches get grants for ice-storm recovery

Two Missouri congregations received $47,500 in initial emergency grants from LCMS World Relief/Human Care and the Missouri District after a Jan. 12-14 ice storm sent trees, limbs, and power lines down throughout the region.

The congregations are Trinity 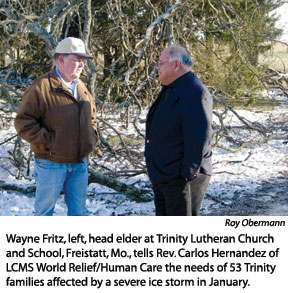 Termed by news outlets as the most devastating ice storm to hit the Missouri Ozarks in decades, it caused a number of deaths, countless destroyed and damaged buildings, and power outages for millions.  Some were without electricity for more than a week.

“I couldn’t imagine how freezing rain and sleet could do all that,” said Rev. Carlos Hernandez, director of districts and congregations with LCMS World Relief/ Human Care, after conducting an assessment in the area Jan. 22-24.  “In some areas it was like beautiful artwork, and in others it looked like a bomb had hit.”

“We want our congregations to know that LCMS World Relief/ Human Care responds to immediate needs,” Hernandez said, “and provides for long-term disaster relief and recovery needs they might have through our Emergency Disaster Grants and in partnership with LDR and LCMS districts.”

Hernandez also visited with elders and the principal of Trinity, Freistatt, which currently has a pastoral vacancy. They pointed out that many of their 53 families affected by the storm are made up of elderly and/or economically depressed members.

Hernandez said that as he was leaving Freistatt, he had a call from Rev. Richard Cody, pastor of the Monett congregation, who was beginning to put together a grant request.

“These congregations could use much more help — now and for some time to come,” Hernandez told Reporter, adding that “it all depends on the loving generosity of donors.”