This in itself doesn’t bother me.  The man is entitled to his opinion, and at least one can be sure that his God Is 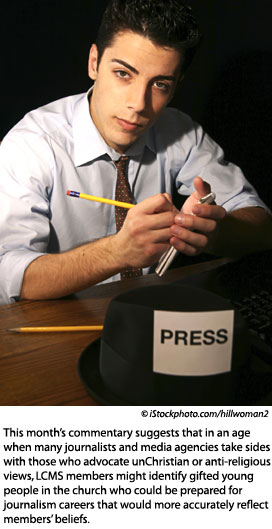 Not Great, How Religion Poisons Everything is stylishly written.  Moreover, I agree with my former boss John O’Sullivan, a fervent Roman Catholic, that by declaring himself God’s enemy rather than a dim-witted agnostic, Hitchens might yet turn out not to be a lost cause; it is easier to hope for thinking atheists than for the mentally idle who don’t know and don’t care.

What gets my gall, though, is something else.  No sooner was this book off the presses than CNN’s Lou Dobbs literally fawned over Hitchens on prime time.  You would never get that much adulation on cable TV if you had just written brilliant work affirming your Christian faith.  Not once did Dobbs ask Hitchens the obvious question: “Tell me, Christopher, don’t you think it rather shoddy to use the current global anguish over radical Islam as an excuse to strike out against all forms of religion, including the Christian and Jewish faiths your forebears owed their culture to?”

Here is my point: So haughty have the major media become in recent decades that the beliefs and sensitivities of the vast majority of their audience no longer matter to them.  This applies to many areas of the human enterprise, but is especially true in questions of faith.

Although nine out of 10 Americans believe in God and most consider themselves Christians, they don’t seem to take offense at powerful media corporations such as CNN, whose founder, Ted Turner, once said Christianity was for losers.  I fear most Americans have been cowed into defeatism by the conceited stars of the small screen.

William A. Donohue, president of the Catholic League, appears to be the only one with the guts to hit back instantly at media bigots — often with significant success.  Lutherans might grumble, but like so many other Christians, they seem to have long accepted the huge disconnect between journalists and the community they serve as if it were some kind of inevitable natural phenomenon, like tornadoes or hailstorms.  We shrug when we read that 91 percent of people working in the national media do not think that belief in God is necessary to be moral, while 58 percent of the general public are certain it is.

A dozen years ago, Peter Steinfels, then the senior religion correspondent of The New York Times, pilloried the media’s failings in covering religion properly in a forum organized by Commonweal, a Catholic magazine.  He explained this deficit thus: “I’ll assign responsibility symmetrically to three sorts of causes — one-third to ideological hostility; one-third to ignorance, incompetence, and insufficient resources; one-third to the inherited definitions of news, and the inherent constraints of time and space.”

Ideology, ignorance, and incompetence — these three are constituent parts of arrogance, a human property Johann Wolfgang von Goethe once defined as a synonym for stupidity.  Arrogance has become the mark of a crop of college-trained journalists that emerged in the mid-1960s.  The Australian-born publisher Rupert Murdoch described them disdainfully as “self-important pundits out of touch with the public taste.”

This has not always been so.  Like some of literature’s finest wordsmiths, such as G.K. Chesterton and Evelyn Waugh, journalists of another generation did not understand themselves as professionals or intellectuals but as craftsmen trained not in some ivory tower by liberal arts professors but by masters in their field — tough old craftsmen themselves.  These men and women taught fledgling journalists to respect the “little guy’s” values, which today’s media and academia have largely replaced with political correctness.

In a 1996 study of the contemporary press, James Fallows wrote: “Until about the mid-1960s, journalism was essentially a working-class activity.  In big cities the typical reporter would make about as much as the typical cop.  Many reporters had not gone to college.”  Fallows went on to quote Richard Harwood, a longtime Washington Post correspondent: “In early times we were not only describing the life of normal people, we were participating in it — we were more or less on the same level.  We lived in the same neighborhoods.”

This is precisely the point where confessional Lutherans are superbly equipped to help reverse a perilous development that before long will destroy freedom and democracy because both depend on a well-informed public.  We have all the tools for such an undertaking at our disposal.  We have the right doctrine by which journalism must be seen as a divine vocation for the secular “left-hand” kingdom if exercised unselfishly — meaning without hubris — out of love for one’s neighbors, in this case readers and viewers.

The Lutheran Church–Missouri Synod owns the second-largest parochial school system in the country.  If its teachers were only aware of the severity of this problem they might try to identify journalistically gifted children at an early age and steer them in the right direction, chiefly by encouraging the unquenchable sense of wonderment that should be a journalist’s premier quality.

Retired editors and reporters — master craftsmen — could be brought in to help train these kids, send them on assignments, publish their work in internet publications especially developed for this purpose, and farm them out as interns to small-town newspapers and radio stations that have remained faithful to old standards.  Then, after graduating from high school, these prospective journalists should train for two years as copyboys and copygirls in such media outlets or indeed in the Missouri Synod’s own radio station, KFUO in St. Louis, which should be turned into an institution we might call “Concordia Public Radio.”

Once they have been “on the beat” for two years, I am confident that well-trained young journalists will not allow their minds to be closed in college, and that danger would be even less if this school happens to be a Concordia University.  But this means that the Concordias and their benefactors first have to wake up to the pressing need for such a novel journalism program whose goal must not be to create “Lutheran” journalists but equip Lutherans and