Dr. Samuel H. Nafzger, executive director of the Synod’s Commission on Theology and Church Relations (CTCR) since 1975, told the commission at its Sept 6-7

meeting that he has decided to accept a formal request from Synod President Gerald B. Kieschnick to head a proposed church relations branch of the president’s office and the CTCR, beginning next July 1.

During that meeting, the CTCR also authorized a third theological convocation in the Synod.

Nafzger said that as a result of his accepting the new church-relations post, he will not allow his name to stand for reappointment to his present CTCR position when it comes up for renewal next summer.

Dr. Jerald Joersz announced in late spring that he would be retiring as the CTCR associate executive director at the end of this year, prompting the commission to issue a call for nominations in June and July to fill the vacant staff position.
Nafzger said that he wrote to Barbara Ryan, the Synod’s executive director of Human Resources, requesting that process to be put on hold until after the details of the new church-relations position have been agreed to by Kieschnick’s office and the CTCR.

“For the past few years, I’ve been exploring with Dr. Nafzger the possibility of providing more specific leadership in the Synod’s church relations endeavors, which have become more complex and time consuming as church bodies around the world have approached our Synod with a request for assistance and closer relationships,” Kieschnick wrote in a Sept. 18 e-mail to Reporter.

Kieschnick explained that just after he became Synod president in 2001, he “discovered the great need and huge opportunity that exists for 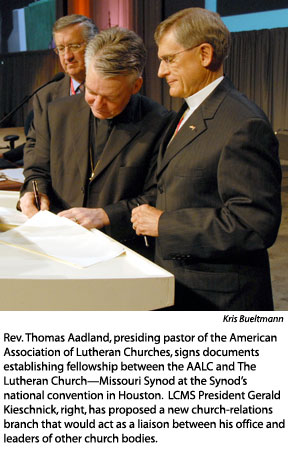 the LCMS to provide leadership in worldwide confessional Lutheranism.”

He cited Synod Bylaw 3.9.6.2.2, saying that “one of the duties of the CTCR is to ‘assist the President of the Synod at his request in discharging his constitutional responsibilities for maintaining doctrinal integrity as he relates to other church bodies.’ ”

“Dr. Nafzger is a recognized world leader and respected Lutheran theologian who is exceptionally well qualified to serve in this unique capacity,” Kieschnick stated in the e-mail.  “I truly believe this decision will be a blessing to our Synod and to other confessional Lutheran church bodies around the world.”  Nafzger, who is 68, joined the CTCR staff in 1973.

“In one form or another, I have been with the CTCR now for 33-plus years,” Nafzger told Reporter.  “Nothing is going to change immediately, since I will continue as executive director until next July 1, and will continue ties to the CTCR in the new post.”

Also during its Sept. 6-7 meeting, the CTCR approved a proposal for a third theological convocation in the Synod since 2002, tentatively setting the Model Theological Convocation for August 2008.  The convocation will concentrate on the theme of “the theological principles undergirding the structure of the Synod.”

Nafzger noted that the 2008 convocation theme dovetails with the work of the Blue Ribbon Task Force on Synod Structure and Governance, and that the  model convocation will likely use the task force’s “Congregation-Synod-Church” document as its primary resource.

That document, which addresses those theological principles, was prepared by the theology subcommittee of the task force.

Nafzger said that the CTCR noted during the September meeting that it received 10 new assignments from the Synod’s 2007 convention — “the most it has ever received at the same time from a Synod convention.”

‘Operation Barnabas’ looks to support those back from war