‘Operation Barnabas’ looks to support those back from war

The war in Iraq has affected every Lutheran Church–Missouri Synod congregation in some way, according to Chaplain Mark Schreiber, director of the Synod’s Ministry to the Armed Forces.

Most, if not all, Schreiber says, have members serving in the military overseas, including war zones in Iraq and Afghanistan, and “everybody who 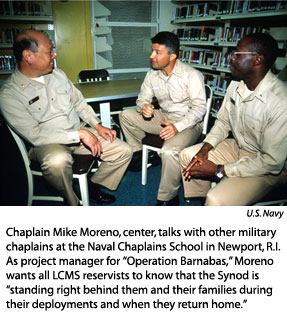 comes back from a war zone experiences some kind of stress” trying to adjust to everyday life back home.

“So the potential for pastoral care for all of those people is simply enormous,” he says, and that’s where “Operation Barnabas” can help.

Mandated by delegates to this summer’s LCMS convention who asked the church to address the needs of military chaplains and other service men and women, Operation Barnabas is designed to support Lutheran chaplains and reserve soldiers returning home from war — much like St. Barnabas was a friend and supporter to St. Paul in his ministry.

Organizers of the new program — which may be in operation as early as January as a pilot for reserve chaplains only — intend to place a “liaison person” in each LCMS district who would work with congregations to support reserve chaplains and their families before they are called to duty, while they are deployed, and when they return home.

Phase II will expand Operation Barnabas to all reserve soldiers who are members of LCMS congregations.

“The liaison person is going to be, probably, a reserve chaplain who has been to Iraq or Afghanistan, and who has been there recently,” Schreiber told Reporter.  Other candidates include retired military chaplains, he added, but the important thing is that the person have a military background.

That way, he said, “they can talk the same language, have an experiential background they hold in common, especially a war-zone experience. …  We want the reserve chaplain and any Lutheran vets who are experiencing any kind of stress in reaction to coming back from a war zone to be able to talk confidentially with someone, and to open up and share their feelings.

“And it’s hard to do that if you’re talking to a civilian whose intentions may be very good, but there’s just no connection — they’re not ‘getting’ what you’re saying, and where you’ve been, and what you’ve done.”

Heading Operation Barnabas is Chaplain Mike Moreno, whose part-time salary is being paid by the Ministry to the Armed Forces office, which operates under the LCMS Board for Mission Services, and LCMS World Relief and Human Care.  Moreno, of Norfolk, Neb., began serving the new program Sept. 1.

“The Gospel is deep and rich and gives us strength, but chaplains and pastors are still human beings who get tuckered out,” said Moreno.  “They need a little down time to reconnect with their families and catch their breath.”

Moreno, a former Navy chaplain who served more than seven years in active duty, including time in Iraq, encourages congregations to talk with their pastors in the reserves before they are called to duty to determine how best to support them and their families if they are deployed.

“All too often, reservists ‘fall between the cracks’ and may not get the help and resources they so richly deserve,” he said.  That’s usually because reservists live far from military bases, and the support services they offer.

Through Operation Barnabas, he said, “we would like to ensure that no one falls through the cracks” by offering them the services of LCMS active-duty and reserve chaplains, as well as caring members of LCMS congregations.

“I would like our reserve chaplains and all reservists to know there are 2.4 million saints of the LCMS standing right behind them and their families during their deployments and when they return home,” he added.

Support for returning reserve chaplains and soldiers is “sorely needed,” acknowledged Schreiber, who says “at any given time, we have about 15 chaplains that are serving in either Iraq or Afghanistan.”  Another dozen or so have been there and back, he said, on tours ranging from four to 15 months, depending on their branch of service.  More than 100 LCMS pastors serve as reserve chaplains.

Add to that the literally hundreds — perhaps thousands — of LCMS servicemen and women who have been deployed, and you’re talking about significant numbers — and needs, he said, especially when you consider that at least one in 10 suffer from Post-Traumatic Stress Disorder (PTSD), a serious and often debilitating mental illness.

Rev. John Fale, associate executive director of LCMS World Relief and Human Care and a certified pastoral counselor, noted that while all returning soldiers need time to adjust to life back home, most will not have PTSD.

“Congregations don’t need to be ‘on guard’ about their pastors and members who return from active duty, but realize that a re-entry period is important and that resources are available that can offer support,” Fale said.

Schreiber’s office and its counterpart in the Evangelical Lutheran Church in America have been working on the “nuts and bolts” of Operation Barnabas for more than a year.

About two dozen reserve chaplains and their wives from both denominations were interviewed about their war experiences at joint chaplains conferences in January and March, and “they were all 100 percent behind [Operation Barnabas] and for it,” according to Schreiber.  In fact, more than a dozen of the LCMS chaplains who took part in the interviews have volunteered to serve as district liaisons, he said.

War is stressful for everyone in a war zone, Schreiber said.  “So we have to be sure that we’re there, supportive, and that they have a proper re-entry when they come back.  That’s the key — proactive pastoral care.”

To read more about Operation Barnabas, see the story by Kim Plummer Krull in the November issue of The Lutheran Witness.