ACCRA, Ghana — The International Lutheran Council (ILC) accepted four new member church bodies — the most at any one time — during its 22nd international conference here Sept. 24-30. 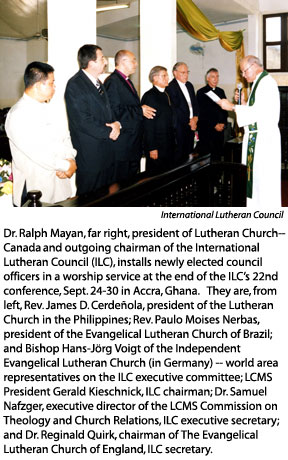 h the inspired and infallible Scripture, as confessed in the Lutheran Confessions.

The council elected and installed LCMS President Gerald B. Kieschnick as ILC chairman and Dr. Reginald Quirk — chairman of the Evangelical Lutheran Church of England — as secretary.

Kieschnick succeeds Dr. Ralph Mayan, president of Lutheran Church–Canada (LCC), who served as ILC chairman for the past nine years and who has announced that he will not stand for re-election to the LCC presidency.

The Evangelical Lutheran Church of Ghana hosted the conference, at which 27 ILC-member churches were represented, along with invited guests from eight other Lutheran church bodies.

In addition to admitting new church body members, the council acted on a number of resolutions, including those that:

“Living as reconciled children of God” was the theme for this year’s international conference, with 2 Cor. 5:18 as its scriptural basis.

Also, Ted Kober, founder and president of Ambassadors of Reconciliation of Billings, Mont., offered the keynote address and daily presentations on the topic.

“Everyone there was deeply moved by Ted’s presentations, especially his emphasis on the need for confession and absolution, at home and in our church bodies,” Nafzger said.  “The presentations were outstanding — helping this to be a very positive conference.”

In his report, Nafzger quoted from his 2005 report to the conference, saying, “I am convinced now more than ever that there is a pressing need ‘for the truly confessional Lutheran churches from around the world to stand together in witness to the beautiful Gospel message of the forgiveness of sins, life, and salvation through the suffering, death, and resurrection of Jesus Christ — and in Him alone.’

“Today, more than ever,” he said, “there is a need that we support one another and nurture relationships with each other that show this conviction.”

The next ILC conference is being planned for Korea in 2009.  Later conferences will be scheduled in line with the newly-approved three-year cycle.

Information for this article was compiled by Dr. Dieter Reinstorf, vice president of the Free Evangelical Lutheran Synod in South Africa.