A South African orphan captured the caring spirit of the audience that packed a St. Louis concert hall for a celebration to help young people develop their gifts in a country tragically challenged by poverty and disease.

“I want to finish my studies 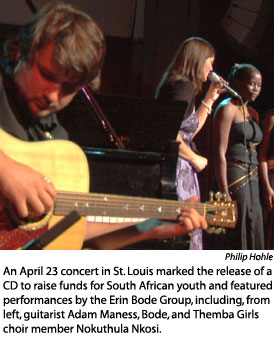 and get a job and help my family improve their life,” Nokuthula Nkosi said.

The young woman is a recent graduate of the girls high school operated by the faith-based Themba Trust, the focus of a charitable campaign by LCMS World Relief/Human Care in partnership with jazz artist Erin Bode.

The sold-out April 23 concert marked the release of the CD featuring Bode, Nkosi, and 16 other members of the Themba Girls school choir.  The event radiated with emotional expressions of care and mercy — from the performers on stage and running throughout the audience of more than 700 church and community leaders and generous LCMS World Relief/Human Care donors.

“This is like a miracle,” said Reinhild Niebuhr, trustee of the Themba Trust, who traveled from the foundation’s headquarters in Dirkiesdorp.  “I am really overwhelmed, amazed, and humbled by the generosity of people in this country and who are here tonight.”

“I am excited about the possibilities of people in America seeing the people of Africa in a different light — not just as people in a country of poverty and illnesses but a people with huge potential,” Niebuhr said.  “God is pointing the way for people in America to help young people find and use their potential.”

The concert featured the Erin Bode Group performing with two of the Themba choir’s lead vocalists, Nkosi and Senzy Khumalo.  The beautiful, inspirational 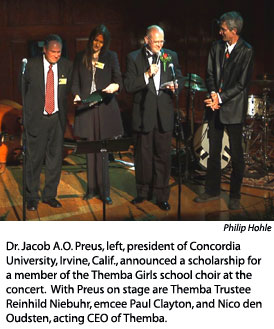 Preus announced the university would award a full, four-year scholarship to Portia Xaba, a Themba Girls member who graduated at the top of her 2006 class.  Xaba is an orphan who has no financial resources to continue her education.  LCMS World Relief/Human Care will cover her books, room, board, and annual travel expenses from Johannesburg.

Preus is “Uncle Jack” to Bode, whose LCMS family tree also includes a father and two brothers who are pastors and a grandfather who is a former Oklahoma District president.  Her other grandfather, the late J.A. O. Preus, was Synod president from 1969 to 1981.

Harrison also announced a matching gift opportunity made possible by a generous donor.  All gifts of more than $25 to LCMS World Relief and Human Care to benefit the Themba Trust will be doubled.

Only five percent of South Africans between 18 and 25 complete their high school education and find employment, according to Niebuhr, who has written a book about African youth.  The country’s average life expectancy is just over age 40, she said.

Themba will use proceeds from the CD to provide scholarships for needy students, who account for at least one third of the 500 “learners” at its two residential high schools (one each for girls and boys).  Many students come from poor families who are members of the Lutheran Church in Southern Africa, an LCMS partner church.

If those scholarships are fully funded, the foundation hopes to start a music center to offer training that, surprisingly, the schools’ talented students lack.

“God has given the gift of music to South Africans, and it’s a gift we want to share with people outside of Africa,” said Niebuhr, whose dream is that the center will develop and eventually record the music of Lutheran African congregations.

It was about a year ago that Rev. Matthew Harrison originally conceived the idea to pair the Themba Girls with Bode, a St. Louis-based recording artist.  The mercy ministry executive director drew some of the evening’s most hearty applause when he made the evening’s final announcement.

“If we get the response we expect, LCMS World Relief/Human Care hopes to bring all 17 of the Themba Girls here this fall for a choir tour with Erin,” Harrison said.

Bode donated her time to assist Themba and the choir members.  “God gave us a great blessing by bringing us together with these girls.  We are so grateful for the relationships we have and so grateful that this will help the girls,” she said.

Like the refrain of an inspirational hymn, the theme of care and mercy echoed even after the concert celebration ended.

LWML President Linda Reiser attended the concert en route to her Nebraska home so she could hear Bode, who will perform at the June 21-24 LWML convention in Sioux Falls, S.D.  Reiser said she was touched by the evening’s focus on giving to others.

“This spotlight wasn’t on ‘me’ or ‘I, ‘ but on helping others.  Just like when the South African girl said, ‘I want to help my family,’” Reiser said.  “That’s what the LWML and LCMS World Relief and Human Care have in common: We care about and want to help others.”

A gift of $150 to LCMS World Relief/Human Care for the Themba Trust will provide room, board and tuition for a student for one month.  Gifts of $25 or more receive the complimentary CD, “The Themba Girls with the Erin Bode Group.”