In a Dec. 4 editorial, the Orlando Sentinel lauded Hoard as “tenacious and compassionate … a poignant voice in this community since moving here 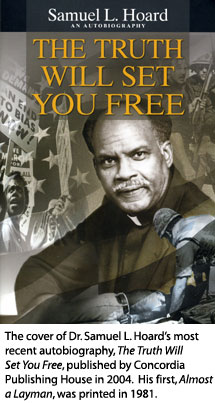 in 1972.”  Hoard, pastor of Our Savior Lutheran Church there, often wrote letters to the newspaper related to issues in the Black community.

“Mr. Hoard showed this community what the true spirit of activism is all about,” according to the editorial.

Raised in St. Louis, Hoard was the second African American to be admitted to Concordia Seminary there.  A 1957 graduate of the seminary, Hoard wrote about his struggles with racism in the 1950s in the community — and in the church — in his 2004 autobiography, The Truth Will Set You Free.

“With those experiences, he grew into a dogged activist who championed equal rights and political gains for Blacks in Orlando,” according to a Dec. 2 story about Hoard in the Sentinel.

Hoard served as a U.S. Army chaplain for 27 years that included a tour in Vietnam where he earned the Silver Star Award for “ministering to troops under intense enemy fire.”  He received several other awards during his ministry, including the Servant of Christ Award from Concordia College, Bronxville, N.Y., and the Martin of Tours Medal from the Synod’s Ministry to the Armed Forces.

Prior to moving to Orlando, he had served as pastor to congregations in New York City and Kansas City, Mo.

After his retirement in 1992, Hoard spent 15 years teaching inmates at the Orange County Jail, helping them earn high-school equivalency certificates.

Close friend Jacquelyn Bowers told the Sentinel that Hoard “so deeply cared” about those inmates.  “He tried to do everything he could to encourage them and make them understand the importance of doing right,” she said.

Dr. Robert King, who served 21 years as an LCMS vice president and is now retired, said Hoard “exemplified the love of Christ” in both his personal and professional life.  “He truly believed in Christ, not only inwardly, but outwardly,” King told Reporter.

King said he spoke to Hoard the day before he died, and told him he would remember him in his prayers.

“You do that,” Hoard replied.

Longtime LCMS Black-ministry leader Dr. Richard Dickinson said Hoard had worshiped at his congregation, Great Commission Lutheran Church in north St. Louis, when he was home for a visit about six months ago.

Hoard had worked hard for racial integration in the Synod, said Dickinson, and “was a great guy and really Lutheran to the core.”

The two regularly wrote letters to each other in German “just for the fun of it” and Dickinson said he would miss those “good times.”

Hoard is survived by his wife, Mary Jo, and sons Samuel L. Hoard Jr. and Joel Alan Hoard — all of Orlando.

Memorials are requested for the Lutheran Human Relations Association in Milwaukee and for the LCMS Board for Black Ministry Services, St. Louis.