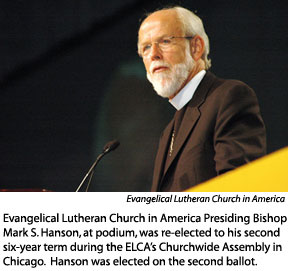 six-year term in that office.  Hanson was elected on the second ballot.

The assembly also elected (on the fifth ballot) a new ELCA secretary –- David D. Swartling, 60, an attorney from Seattle. He succeeds Dr. Lowell G. Allmen, secretary since the ELCA’s formation in 1987.  Allmen announced last year that he would not seek re-election.

With a vote of 1,000 to 19, voting members endorsed “Book of Faith: Lutherans Read the Bible,” a sweeping five-year initiative to promote studying the Bible throughout the 4.8-million-member ELCA.

They also adopted a ninth social statement for the church body titled “Our Statement in Education.”  It addresses issues of children’s faith formation; equitable access to education; quality of U.S. public schools; and support for Lutheran schools, colleges, and campus ministries.

With a separate approved resolution, voting members called for development of a new social statement on criminal justice by 2013.

Among other actions, they approved:

In his Aug. 10 remarks to the ELCA assembly, LCMS President Gerald B. Kiesch 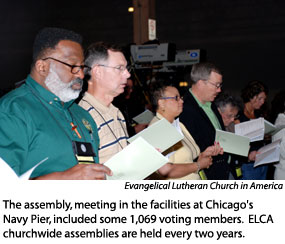 nick said he “read with interest” about the ELCA’s proposed initiatives —  particularly those about mission and outreach, renewed evangelism leaders, discipleship, and “Book of Faith: Lutherans Read the Bible.”

“A dependence on Scripture is central to such efforts and is of absolute necessity if Christians are to bring faithfully and fruitfully the one message of Christ to the world,” Kieschnick said.  “Every initiative and directive of the church must be guided and empowered by the Word of God.”

For more on the 2007 ELCA Churchwide Assembly, click here.