In the wake of offerings that aren’t keeping pace with costs, an LCMS Fiscal Conference, meeting Feb. 8-10 in St. Louis, focused on shoring up the district and national budgets of the Synod so they can provide the essential 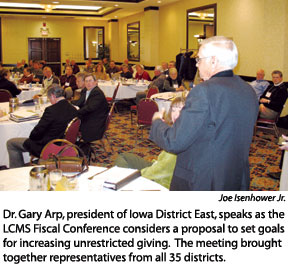 services that congregations have agreed to do together as a Synod.

Emerging from the conference was a resolution encouraging all LCMS congregations “to vigorously support the Synod’s mission statement” and suggesting a formula to increase giving for the general work programs of districts and the national Synod. The conference also urged careful study of the report from the Blue Ribbon Task Force for Funding the Mission, especially its recommendation for a “Stewardship Renaissance.”

LCMS President Gerald B. Kieschnick encouraged the conference to give its counsel to the floor committee on program and finance for the July 14-19 LCMS convention. “I will make a commitment to you that I will honor that recommendation and will take it to the Council of Presidents [COP] for its input and, hopefully, its affirmation,” Kieschnick said.

Meeting after the fiscal conference, the COP agreed to set up regional gatherings of districts, which would collaborate to help congregations raise their unrestricted support of district ministries by 1.5 percent annually through 2010.  In turn, districts would increase their unrestricted support to the national Synod by 0.5 percent annually through 2010.

The COP arranged the conference in response to a recommendation for triennial fiscal conferences from the Blue Ribbon Task Force for Funding the Mission.  That task force, requested by the 2004 LCMS Convention, was charged to recommend a funding system for the Synod that addressed the 30-year trend away from a predominantly “unified budget” to a system that relies significantly on direct gifts.

The task force issued 11 recommendations to the convention, starting with a “Stewardship Renaissance” — a renewed emphasis on biblical stewardship education and motivation for the pastors and laypeople in the Synod.  It recommended holding triennial fiscal conferences to decide the fair share each district would contribute, planning ahead three years to aid in district-Synod planning, and gradually increasing the total amount submitted to at least $25 million by 2017.

“We don’t want to argue about how to cut the pie, but how to bake a bigger pie and that the Lord would use us as bakers,” Dr. David Buegler, Synod fifth vice president and chairman of the Funding the Mission task force, told the conference. He added, “Never in our wildest dreams would we have thought there would be a fiscal conference before our report is delivered to the convention.”

Representatives from all LCMS districts attended the fiscal conference.  In small groups and plenary sessions, they spoke of ministry challenges and opportunities in their districts and heard reports on national and district budgets.  They discussed the erosion of unrestricted giving — mostly gifts made in congregational offering plates — to the districts and to the national Synod.

As unrestricted revenues plateau, the national Synod has relied on funds raised through direct and planned giving to support ministries such as world missions, world relief, and higher education.  For example, the current spending plan is based on $20.5 million from congregational offerings, which pay for core services of the Synod.  In addition, the budget anticipates $68 million from donations and bequests designated for specific purposes.  The designated gifts come from individual donors, congregations, or other sources.

The conference shared fiscal information from the national Synod and districts.

Discussing the Synod’s 2005-06 audited financial statement, Thomas Kuchta, vice president — finance, said the Synod had revenues of $95.2 million, including $12 million paid to Concordia Plan Services for administration of the retirement, health, and disability benefits for employees of Synod organizations.

The Synod’s net assets declined by $3.8 million at the close of the 2005-06 fiscal year, Kuchta said.  A major reason was that anticipated annual fundraising for missions fell short by $2.8 million.  Kuchta said the trend appears to be continuing this fiscal year. LCMS World Mission has deferred programs to decrease its spending, but Kuchta added, “It looks like another series of cuts if things don’t materialize quickly.”

Kuchta also compared budget information from the past fiscal year with the current year, noting that district budgets have decreased by about $8 million.

Buegler said the Funding the Mission task force sought to find “a better way to look at the big picture.”  While celebrating the growth in direct giving, the task force emphasized responsibility toward one another in the Synod and encouraged support for work of the common good.  “None of us is as strong as all of us are strong,” he said.