Dr. Jim Koerschen of Brighton, Mich., began serving in July as the third head of school at CISS.  He succeeds Dr. David F. Rittmann, who died of a

Koerschen, 61, formerly served as executive director of enrollment services for Kettering University (formerly GMI) in Flint, Mich.  For 11 years (1992-2002), he was president of Concordia University in Ann Arbor, Mich.  Prior to that, he served as dean of student affairs and associate professor of education at Concordia College (now University) in Seward, Neb.

Koerschen earned his bachelor’s degree from Concordia, Seward, in 1968; his master’s in education in 1971 from Wayne State University, Detroit; and a doctorate in administration in 1987 from the University of Texas, Austin. 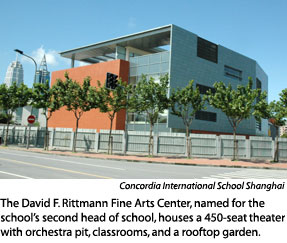 an Church–Missouri Synod (the other is in Hong Kong).  It opened in fall 1998 with 22 elementary- and middle-school students.  Located in Shanghai’s Pudong international-business district, the school offers an American-based curriculum in a Christian context to foreign-passport-holding students.

The two new buildings opened this fall on the 10-acre campus are:

“I am very excited that God has placed me in a leadership role at a dynamic Christian school that is growing rapidly within one of the most dynamic cities in the world,” Koerschen told Reporter.  “I am grateful that I have the opportunity to continue building on the great foundation laid by founder Alan Schmidt and his successor, David Rittmann.

“CISS has a very committed board of directors, an awesome faculty, and an outstanding administration.  I am truly humbled to have been called here.”

Koerschen added that “God has richly blessed” he and his wife, Joanie, also an educator, “by moving us out of our comfort zone in Michigan” to the opportunity in China.  The couple have two married daughters and four grandchildren.