The Lutheran church leaders, meeting as the Committee on Lutheran Cooperation (CLC), normally meet twice a year to discuss their common witness and p 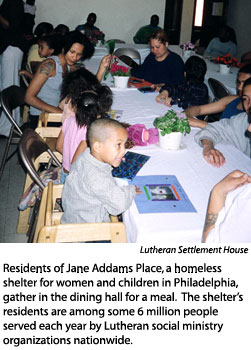 rovide updates to each other about current joys and concerns within their church bodies.

The leaders spent considerable time discussing their collaborative ministry through Lutheran Disaster Response, focusing on different understandings of the ministry that have emerged in recent years.  Rev. Matthew C. Harrison, executive director of LCMS World Relief and Human Care, and Rev. Rebecca S. Larson, executive director, ELCA Church in Society, agreed to continue discussions about the ministry and return to the CLC with recommendations for the future.

At this meeting, the leaders met with executives who lead Lutheran Immigration and Refugee Service (LIRS), Lutheran Services in America (LSA), and Lutheran World Relief (LWR), all based here:

At the conclusion of the meeting, the Lutheran church leaders agreed to keep meeting as a sign of commitment to shared ministry.  Hanson said the two church bodies have a warm relationship, and it is the ELCA’s intention to move toward “altar and pulpit fellowship” with the LCMS.

Nafzger agreed, saying he “can’t imagine how any Christian can be satisfied with division at the altar, but [that] the Missouri Synod is committed to the Lutheran understanding that altar and pulpit fellowship must be based on agreement in doctrine and practice, and that won’t happen if we don’t keep on talking to one another.”

Kieschnick added that he appreciated the ELCA leaders’ willingness to meet with LCMS leaders, “even though significant theological differences continue to exist between the two church bodies.” Some in the LCMS have been critical of the meetings with ELCA leadership because of those differences, he said.

Kieschnick indicated the LCMS leaders’ willingness to continue meeting with ELCA leaders “because it’s the right thing to do.”

LCMS membership down, donations up in ‘06