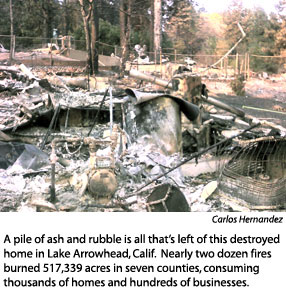 after a week of wildfires that raced across much of Southern California, from Los Angeles to San Diego.  No Synod congregations incurred damage to church property, however.

LCMS World Relief and Human Care, the Synod’s mercy arm, awarded a $50,000 emergency grant to the LCMS Pacific Southwest District for distribution to affected congregations, members, and neighbors, with much more needed to help members and their neighbors.

The California Department of Forestry and Fire Protection reported that 23 fires fanned by Santa Ana winds burned 517,339 acres in seven counties, consuming thousands of homes and hundreds of businesses in the week starting Oct. 22.

Total losses exceed $1 billion in San Diego County alone, according to news reports. At least a dozen fire-related deaths have been reported.  More than half a million people were forced to evacuate their homes in fire-affected areas.

As of Oct. 29, 16 of the fires were 100 percent contained.  Despite rain and diminished wind over the weekend of Oct. 26-28, seven fires continued to burn, but were expected to be contained by Nov. 5.

Representatives of the LCMS Pacific Southwest and English Districts — both of which have member congregations in fire-affected areas — indicated they expected to hear of further damage to members’ homes as more of them were allowed back into their communities.

For many in the areas of the wildfire, the experience was a familiar one, since they also were affected by the 2003 Cedar Fire, which burned 280,278 acres and nearly 3,000 buildings across southern California.

“Just imagine coming home to a chimney and your car melted in your driveway,” said Jerry Reichman, disaster coordinator for the Pacific Southwest District.  “Pray for these people, particularly those going through this for the second time.”

Merritt and Rev. Carlos Hernandez, director of districts and congregations with the Synod’s mercy arm, were in Southern California the week of Oct. 22 to assess damages, as they met with pastors in Escondido and San Diego to help organize assessment and relief efforts.  They planned to return to continue training churches in response efforts.

One LCMS family already has requested financial assistance from the Pacific Southwest District.  They were in a mobile home as they rebuilt their home destroyed the 2003 Cedar Fire.  The site wasn’t touched by fire this time, but strong Santa Ana winds knocked the mobile home from its foundation and they lost water.

At press time, district officials said that congregations were focusing on contacting members and compiling lists of their needs.  The Pacific Southwest District has a team in place to determine how to best provide for these people.

But aid is not limited to LCMS members, as congregations also reach out into their communities.

Community Lutheran Church in Escondido provided a place for National Guardsmen to rest and refuel, and are gathering household items for affected families.

Sarah Grainger, the office manager for Community, said members are donating anything from beds and blankets to pots and pans for families who lost everything.

Church of Joy in Chula Vista also provided shelter to evacuees, and members from Mount Olive in Poway volunteered at the local Red Cross shelter.

Reichman says the next step for many people is a grief and recovery period.

The district office received calls from pastors willing to provide spiritual and emotional care, and volunteer grief counselors were expected to begin arriving by Oct. 29.

In a joint statement released Oct. 26, Synod President Gerald B. Kieschnick and Rev. Matthew Harrison, executive director of LCMS World Relief and Human Care, also called on the church body at-large to support those in southern California through prayer and financial donations.

Merritt emphasizes that monetary donations are “greatly needed” — more so than material goods.

Sarah Schafer is a writer/developer with LMCS World Relief and Human Care in St. Louis.