“This veto and the previous one by the president have prompted researchers to explore and find fascinating new progress in other areas of ethical stem-cell research that we don’t have to disagree about,” said Karner, one of three LCMS leaders and nearly 200 guests invited to the White House on June 20 to witness the president’s announcement of the veto.

At the same time, Bush issued an executive order to the National Institute of Health, asking scientists to pursue research on stem cells that do not create, harm, or destroy a human embryo or fetus.

The president long has advocated ethical research using adult or non-embryonic stem cells, and the executive order focuses on “areas of scientific research that are showing real promise and real cures,” said Karner, who directs LCMS sanctity of life programs and resources as part of LCMS World Relief/Human Care. 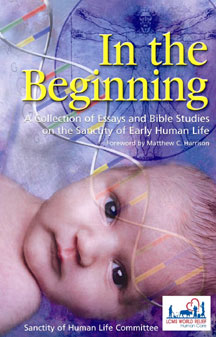 This June, the LCMS Sanctity of Life Committee released In the Beginning, A Collection of Essays and Bible Studies on the Sanctity of Early Human Life.  The eight-session Bible study includes essays by LCMS writers, theologians, and medical experts on topics such as when human life begins and the ethics of stem-cell research.

This resource is “lay friendly,” Karner stressed.  “Science is moving faster than our current ethical guidelines, and these complex issues like stem-cell research can be intimidating to many people,” Karner said.  “We felt it was critical to provide a biblically-based resource that can explain and provide guidance.”

In the Beginning is available in both soft cover and as a reproducible download from the Concordia Publishing House (CPH) Web site.  For more information, contact CPH at (800) 325-3040 or www.cph.org.