SIOUX FALLS, S.D. — Relying on the “rock-solid” foundation of their faith in Jesus Christ, delegates to the 32nd Biennial Convention of the Lutheran 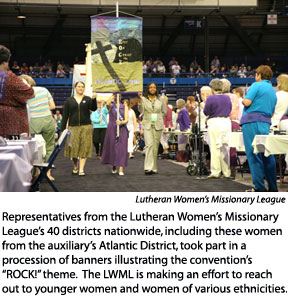 Women’s Missionary League adopted a record-setting mission goal of $1.7 million for the 2007-09 biennium.

More than 5,000 people attended the 65th anniversary convention, held here June 21-24 under the theme “ROCK!  Rest On Christ the King,” from Psalm 31:1-3: “Secure in Jesus, my rock and fortress, I step out in faith to declare His praise and serve others.”

Sioux Falls — known for its pink quartzite rock, second only to diamonds in strength — was mentioned by several speakers as being an apt location for the convention, with its “ROCK” theme.

The record mission goal is $75,000 more than the LWML’s previous goal for 2005-07.  Contributions given by the organization’s 250,000 members nationwide over the next two years will be used to cover organizational expenses and to support 18 mission grants to: 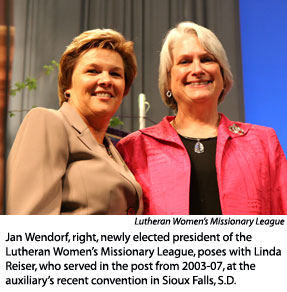 over the next four years — Janice (Jan) Wendorf of Grafton, Wis.

Addressing the convention during the closing service, Wendorf, 56, said she attended her first LWML convention in 1983, in Detroit, and accepted an invitation to begin serving as a local officer shortly afterward.  She encouraged convention-goers to “be open to [LWML] service.  If you feel that nudge of the Holy Spirit … be open to that call.”

She also asked attendees to consider how they will use what they “have heard, seen, and experienced” at the convention to support God’s mission in their own communities.

Newly elected members of the LWML Nominating Committee are Linda Arnold of Woodridge, Ill., who will serve as chairman; Martha Burke of Clemmons, N.C.; Claire Carlson of Hamburg, N.Y.; Judy Lessmann of Scottsboro, Ala.; and Marilyn McClure of Tucson, Ariz.

In her “president’s report,” outgoing LWML President Linda Reiser of Grand Island, Neb., applauded the “Christ-focused service” of LWML members, who have successfully met mission goals and showed an “unending willingness to help others,” not because they seek glory for themselves but “simply and faithfully because there is a need.”

The LWML has been successful, Reiser said, only because of God’s help.  She encouraged attendees to return home and make a difference by faithfully sharing “what Jesus has put in our hearts.”

In his sermon during the convention’s opening worship service, LCMS Third Vice President Dean Nadasdy reminded worshipers of their “safe place” in the “strong and tender” hands of Christ.  Nadasdy cautioned them not to “play it safe” with their faith, but to become bold and “dangerous” in their service to God.

In her keynote, Terry Kieschnick, wife of LCMS President Gerald B. Kieschnick, invited convention attendees to “realize how important you are to this church.”  Kieschnick compared women to diamonds, which share imperfections, unique cuts, and colors.  She called the women “God’s diamonds” and encouraged them to use their gifts in mission and to “leave a legacy.”

President Kieschnick briefly addressed the convention, explaining the Synod’s Ablaze! and Fan Into Flame initiatives and his hopes and dreams for the church body, which included “communicating the grace of Jesus Christ to all”; “restoring health and vitality” to LCMS congregations; and recruiting, training, and retaining professional church workers.

Sporting the new purple-striped LWML tie, Kieschnick referred to a resolution commending the LWML that will be before the Synod’s national convention July 14-19 in Houston.

“Now, if that one doesn’t get 100 percent [approval], I’m going to go looking for the folks who pressed the wrong button,” he joked.

Besides exceeding their 2005-07 mission goal by more than $55,000 and adopting the LWML’s most ambitious mission goal ever for 2007-09, convention-goers gave daily offerings: