LFL invites others to join 'March for Life'

The Northern Virginia chapter of Lutherans For Life (LFL) invites pro-life advocates to join its members in the Jan. 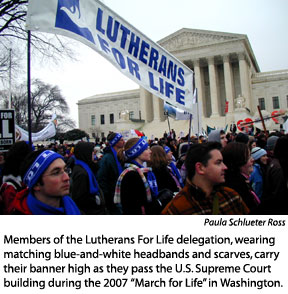 22 “March for Life” and related activities, and is offering to help individuals and groups arrange for complementary housing through host families.

The annual march in Washington, D.C., marks the anniversary of the 1973 U.S. Supreme Court’s “Roe v. Wade” decision that legalized abortion in the United States.  The 2007 march drew an estimated 100,000 participants, including the LFL delegation.

LFL-sponsored activities begin at 9 a.m. with a worship service at Immanuel Lutheran Church in Alexandria, Va.  The delegation will then travel by Metro to the downtown D.C. location where a pre-march rally is planned, participate in the march, and then return to Immanuel via Metro for a 5 p.m. casual dinner and fellowship.

To join the LFL delegation that day, or for more information, call Dennis Di Mauro at (703) 318-7290 or e-mail dennisdimauro@yahoo.com.

“Since 2008 is an election year, the march is especially needed t 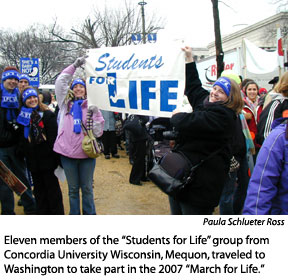 o emphasize the importance of electing pro-life candidates,” said Di Mauro, president of the LFL Northern Virginia chapter and organizer of its march activities.  “It will also serve as a powerful reminder of the need to nominate judges to the Supreme Court who are willing to defend the sanctity of life.”

The 2008 march’s theme is “Build Unity on the Life Principles throughout America.  No Exception!  No Compromise!”  A number of U.S. senators and members of the House of Representatives are expected to address participants during the rally.

An LFL delegation has joined the March for Life each year since 1998.