WASHINGTON — Like a Lutheran island floating in a sea of mostly Roman Catholics, a group representing Lutherans For Life (LFL) held its blue-and-white banner high at this year’s “March for Life” on Jan. 22.

“It is kind of amazing how many Catholics come up to us and tell us, ‘Thank you for being here,’” Karen Frohwein, 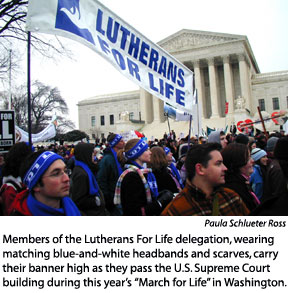 LFL’s director of development, said while waiting on the soggy Mall for the march to begin.  “They’re surprised that Lutherans are pro-life.”

But, added Frohwein — one of about 50 people marching in the LFL delegation to protest abortion — “it’s good to be here.  They need to know that we are pro-life and we’re involved, as they are.”

LFL, based in Nevada, Iowa, is a pro-life, pro-family-life ministry whose mission is to “witness to the sanctity of human life through education based on the Word of God.”  Its resources include LifeDate, a free quarterly journal; Bible studies and informational materials on a variety of life issues; and a national conference held annually.

An LFL group has taken part in the March for Life each year since 1998, beginning their day with what Frohwein calls the “most important” part of the annual observance — a worship service at Immanuel Lutheran Church in nearby Alexandria, Va.

“It’s important to know that this isn’t just a political issue,” she said.  “It’s an issue for the church, and a spiritual issue.” 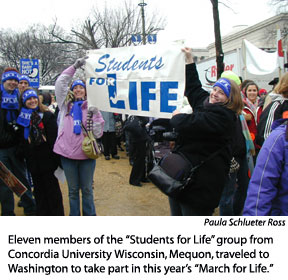 Estimates vary as to the total number of participants at this year’s rally and march on the 34th anniversary of the Roe v. Wade Supreme Court decision legalizing abortion nationwide.  A spokesman for the National Pro-Life Action Center, a sponsor of the annual event, estimated the crowd at between 225,000 and 250,000, while local police gave an estimate of 70,000, according to the Washington Post.

Whatever the number, the mood of the hordes of marchers was upbeat in spite of the cold and dreary day that followed the city’s first snowfall of the season the previous evening.  Thousands of people — more than half, it seemed, were students — stood chatting and laughing on the wet, muddied lawn of the Mall and nearby streets as religious and civic leaders took turns addressing the crowd from a stage during the pre-march rally.  (The observance also included a weekend convention and visits with congressional representatives.) 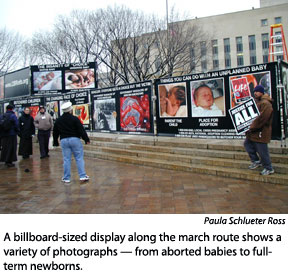 spoke via telephone from Kansas, thanking marchers for their “devotion to such an honorable cause.”

The President described pro-life legislation he has signed — including a law that allows prosecutors to charge those who harm or kill pregnant women with harming or killing their unborn children, as well, and a ban on partial-birth abortion that he promised to “vigorously defend.”

“Last summer I vetoed a bill that would support the taking of innocent life in the hope of finding medical benefits for others, and I have made it clear to the Congress we must pursue medical advances in the name of life, not at the expense of it,” Bush said.

“As we move forward, we’ve all got to remember that a true culture of life cannot be built by changing laws alone.  We’ve all got to work hard to change hearts.”

Dennis Di Mauro, who leads an LFL chapter in northern Virginia and has coordinated the LFL’s participation in the Washington march for the past decade, said he was pleased that this year’s delegation included four LCMS pastors, Lutheran couples from Florida and Tennessee, and a good number of Lutheran elementary, high-school, and college students.

At the same time, he’d like to see more Lutherans show their support for life issues by taking part in the annual march and attending LFL’s annual 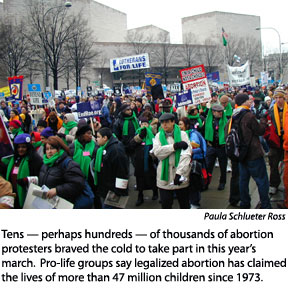 This year, for the first time, 11 students from Concordia University Wisconsin, Mequon, traveled to Washington to join LFL in the march.

“We have a group on campus called ‘Students for Life,’ and we try and get out and do as much as we can,” said Joseph Gutschmidt, a junior.  “When we had the opportunity to come here, of course we were overjoyed to come and to participate in this awesome event.”

A local LFL chapter paid about half the group’s travel expenses, which made it easier for the students to come, according to Kory Janneke, a junior in the university’s pre-seminary track.

Janneke and Heidi Gertsch, a junior majoring in elementary education, both said they were amazed to see so many young people at the march.

“We’ve seen buses full of college, high-school, grade-school kids here from as far as a day or two away,” said Janneke.  “And I think that’s a great sign.”

Gertsch told Reporter that “it’s really comforting and reassuring that we have support, because sometimes it feels like we’re the only younger group around that really fights for life.”

Likewise, Janneke added, “it seems like a day for [all] pro-life people to support each other and get together, because some of these people stand by themselves and have pro-life meetings with just a handful of people, or stand outside an abortion clinic but are outnumbered by the pro-choice people.

“This is a day where they can be reassured that they’re not alone.”

Along with the thousands of marchers were thousands of messages: “Thank God Mary was pro-life.”  “Roe v. Wade: Indefensible.”  “Justice for all — born and pre-born.”  “Defend life.”  “Face it — abortion kills.”

There were red “stop signs” with the words “Stop Abortion.”  Numerous teens wore yellow “hoodies” with the sentiment, “I survived Roe vs. Wade.”  Women held signs proclaiming “I regret my abortion.”  A Hillary Clinton look-alike passed out “Democrats for Life” stickers and brochures.

And full-color photographs of 8- to 12-week aborted fetuses — some as large as billboards — were everywhere.  Pro-life groups, including LFL, say legalized abortion in the United States has claimed the lives of more than 47 million children since 1973, or 3,526 per day. 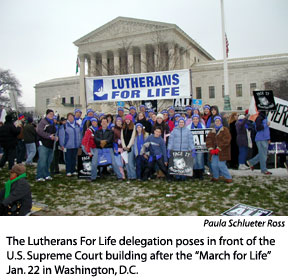 along with her teenage sisters, Zoey and Lucy.