A group of Lutheran Church–Missouri Synod partners say they will start at least 10 Open Arms child care centers — several with new congregations — in the Hurricane Katrina-affected areas of Baton Rouge, La., and Gulfport, Miss., over the next four to five years.

Also involved in the effort are LCMS World Mission, the Lutheran Church Extension Fund, and the Synod’s Southern District.

Two years ago, the institute’s board of directors added “bold outreach ventures” to its mission statement, according to Rev. Philip Kuehnert, board chairman and pas

tor of Zion Lutheran Church in Fairbanks, Alaska.  “We believe that the present proposal is just that — a bold outreach venture,” said Kuehnert, who is spearheading the project.

The idea was planted in January 2005, when Open Arms staff and board members met with Southern District staff to explore the possibility of using Open Arms child care centers as part of hurricane recovery efforts on the Gulf Coast.  The purpose was twofold, according to Kuehnert: to meet child care needs in the area — where, in many cases, both parents must work to make ends meet — and “as a vehicle for mission outreach.”

It started taking shape during the LCMS convention this summer in Houston, when potential partners expressed interest and, at the urging of LCEF President Merle Freitag, Kuehnert put together a plan.  To his surprise, “nobody laughed” at it, he joked.  “At that point I knew that the project had potential.”

More recently, on Sept. 11, representatives of the partnership led two meetings — in Baton Rouge and Gulfport — with Southern District staff, area pastors, and Lutheran disaster-relief workers to introduce them to the Open Arms concept and explain how it could be used in their communities.  As a result, two “guiding teams” are being set up to implement the project in each city, several potential sites for child care centers/congregations have been identified, and the four partners have committed both funding and personnel.

“It’s everybody coming together to try to address a tragedy,” said Dr. Robert Scudieri, associate executive director, National Mission, with LCMS World Mission.  Scudieri describes the hurricane-damaged Gulf Coast as “an ideal place to focus resources” for mission planting and said the project fits right into the national Ablaze! goal of starting 2,000 congregations by 2017.

Since 1989, the Open Arms Institute has helped LCMS congregations start more than 60 child care centers nationwide.  Many of the centers have been started in communities with young families but no Lutheran church, so the child care is used as an outreach tool for bringing families to Christ and planting congregations.

The new partnership, Scudieri said, “multiplies the capacity for Open Arms to help new church starts in The Lutheran 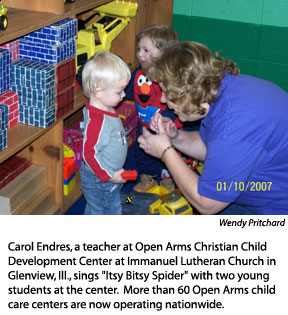 Church–Missouri Synod.”  He believes the number of Open Arms child care centers nationwide could easily reach 500-plus in the next 10 years, he told Reporter.

Rev. Gary Faith, mission executive for the Southern District and pastor of Lutheran Church of the Pines in Waveland, Miss. — a town that Katrina almost wiped off the map — says there is a need for quality child care on the Gulf Coast.

“We praise God that these efforts are beginning to bear fruit,” said Open Arms Institute Executive Director Martin Barlau.  “In the process, we want to continue to do all we can to assure the success of each venture.  We will do this by bringing to bear, as may be needed, the knowledge and experience we have gained over the years.”

Barlau said the institute is “open to whatever level of partnership and participation may be required” and encouraged the Synod at-large to join the partnership “through prayer and other forms of support.”

John Friend, retired Johnson & Johnson executive and former executive vice president for the School of Business at Concordia University, Irvine, Calif., says he is “really impressed” by Open Arms child care centers and has offered his services to the Gulf Coast project as a way of “giving back” to God.  With its unique blend of quality child care and Christian teaching, Open Arms offers “the kind of environment I would like to see my own grandchildren [in],” Friend told Reporter.

His role, Friend said, is to make sure each new child care center has “a strong business plan” and is “fiscally sound,” and he noted that demographics and market-feasibility studies would be completed to assure their success.

The Gulf Coast project is “absolutely” a good idea, he said.  “The folks down there have such a strong need to be normal again … and this helps them do that.”

And, with so many people who have been uprooted and are living “unchurched” lives, Friend added, the new Open Arms centers will provide their children with “a safe place to learn about Christ,” something that is “really needed.”

Faith, the district mission executive, said the Open Arms child care centers provide “an opportunity to have the mission field come to us.”

“Imagine people and pastors greeting kids and parents as they come and go,” Faith said.  “Imagine relationships building and parents realizing that we care about them and their kids.  Imagine parents having problems and being supported by Open Arms staff and church folks.