With his church located just two blocks from the I-35W bridge in Minneapolis, Rev. David Kind was among the first to see the devastation.

Kind, who serves University Lutheran Chapel on the campus of the University of Minnesota, heard about the bridge 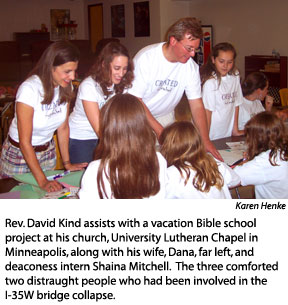 collapse when he answered a phone call from the congregation’s deaconess intern, Shaina Mitchell.  She had left for home minutes earlier and was shocked to see a “huge cloud of smoke” and the downed structure.

Mitchell returned to the church, and, with Kind and his wife, Dana, the trio ran to a bridge on 10th Avenue to get a better look.  From their vantage point, they could see the crumpled I-35W bridge, the wrecked and floating cars, the hysteria.  Police and rescue vehicles had not yet arrived.

“We were standing there, just in shock, as people started to climb out of their cars,” Kind told Reporter.  “I’ve never seen anything like it.”

“When we saw all those cars down there, we thought that there would have to be 30, 40 people killed,” he said.  “It’s a miracle that more people didn’t die.”

Thirteen people are confirmed dead, including Sherry Engebretsen, director of marketing at the Minneapolis office of Thrivent Financial for Lutherans.  Engebretsen, 60, survived by her husband and two daughters, was a member of an Evangelical Lutheran Church in America congregation.  Thrivent has established a scholarship fund in her memory.  (Click here to read story.)

No LCMS members have been reported killed or missing in the disaster.

When police arrived at the scene, they advised Kind to return to his church, where the pastor and his staff were able to comfort two people who witnessed the disaster firsthand.

A woman, who walked away from the scene with minor injuries but “was pretty shaken,” according to Kind, “didn’t know where to go.”  So the LCMS trio escorted her to their church, where she stayed until a family member picked her up.

The woman exhibited “a beautiful Christian faith” and “completely trusted that God had saved her” on the bridge, the pastor said.

A second person, a man, arrived at the church soaking wet.  His daughter had been following him across the I-35W bridge, when he looked in his rear-view mirror and saw that her car had disappeared.  He dove into the river, looking for her, until rescue personnel arrived and convinced him to let them find her.

The man eventually received a phone call, Kind said, telling him his daughter had been found alive.