An alliance between Thrivent Financial for Lutherans and Habitat for Humanity International, called 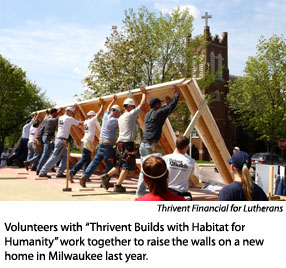 “Thrivent Builds with Habitat for Humanity,” last month celebrated the completion of 500 homes for low-income families.

The homes were built in 45 states over the past two years, with help from thousands of Lutheran volunteers.

“We could not do all that we do without Thrivent Builds,” said Sally LePla, executive director of Habitat for Humanity of Oakland (Calif.) County.  “It has definitely made it possible … to serve more families in need.”

The 500th homebuyer, Lakeisha White, shares a story typical of Habitat owners.  She and her two daughters, ages 12 and 4, were barely surviving in a dilapidated, damp, moldy apartment in a crime-ridden neighborhood.  She wanted to move, but couldn’t afford to pay more for housing and still feed her children.

White applied and was accepted into the Habitat homebuyer program in Pontiac, Mich.  Since then, she has invested hundreds of hours, working beside volunteers, to build her first home.  Later this fall, White will make a small down payment on a no-interest Habitat mortgage and move her family into their new home.

The $105 million, four-year Thrivent-Habitat alliance, formed in 2005, has made home ownership a reality for hundreds of low-income families.

“Our mission is to improve the lives of our members and their communities,” said Brad Hewitt, senior vice president of outreach for Thrivent Financial.  “This alliance is a clear example of putting those words into action, with our members, other Lutherans, and the families themselves to make decent, affordable housing possible.”

By the end of this year, the Thrivent Builds alliance will have completed a total of 650 homes nationwide, involving some 290,000 volunteers.

For more information about the program and how to volunteer, visit the Web site www.thriventbuilds.com.