Two schools operated by LCMS congregations have been named “blue-ribbon schools” for 2007 — the highest honor that the U.S. Department 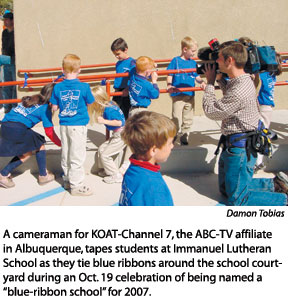 of Education (USDE) gives to individual schools each year.

Started in 1982 and now part of President George W. Bush’s “No Child Left Behind” initiative, the blue-ribbon program “honors public and private K-12 schools that are either academically superior in their states or that demonstrate dramatic gains in student achievement,” according to a statement on the USDE Web site.

U.S. Secretary of Education Margaret Spelling announced the names of the 287 blue-ribbon schools Oct. 2.  Of those, 50 are private schools (the maximum number allowed) — all of which were evaluated and endorsed by the Council for American Private Education (CAPE).

“Excellence is something that our Lutheran schools strive to achieve, and being named a blue-ribbon school helps the schools to reach that goal,” said William Cochran, director of Lutheran Schools with the LCMS Board for District and Congregational Services.  “It shows that our schools are concerned and care about the overall success of each child.  I congratulate these two schools and consider this an outstanding honor for both of them.”

“We are very proud of our school, and feel very honored,” Immanuel’s principal, Charlie Pflieger, told Reporter in a telephone interview Oct. 25.

“This is the best kind of award — for everyone at the school,” Salem’s principal, Mary Beth Gaertner, wrote via e-mail the next day.

Both schools are K-8th grade, and include a preschool.

The Albuquerque school, founded in 1924, has 208 students and 14 faculty members; while Salem, Tomball (about 10 miles northwest of Houston and in operation since 1853) has 380 students and a full-time staff of 40.

Both schools qualified for blue-ribbon status based on their students’ consistent marks among the top 10 percent nationwide of all those who take the standardized Iowa Test of Basic Skills.

Pflieger and Gaertner were notified about their schools’ being chosen for the blue-ribbon status in Oct. 2 e-mail messages from CAPE.

“Initially, our kids had no idea what it was all about,” Pflieger said of students’ reaction when he announced the school’s blue-ribbon honor Oct. 10 during the weekly chapel service.

But by Oct. 19, he said their enthusiasm was obvious as camera crews from all three Albuquerque network affiliates were on campus as each student attached a blue ribbon in the school courtyard at a celebration that featured the student band, a short presentation from the principal, and ice cream for everyone — including parents.

A special prayer of thanksgiving was offered during the congregation’s Oct. 7 services.

Gaertner wrote that she announced Salem, Tomball’s, blue-ribbon status immediately to the students and the faculty, and via e-mail to parents.

The school celebrated with a special chapel service — along with blue ribbons, banners, blue donuts, and blue bookmarks.

“We also were not surprised … that God timed it perfectly,” Gaertner wrote, explaining that the blue-ribbon announcement tied in nicely with the congregation’s Oct. 14 groundbreaking for its new 90,000-square-foot community center and baptisms of 56 people (including 16 current Salem Lutheran School students).

A Houston TV news crew interviewed Immanuel’s pastor, Rev. Wayne Graumann, just after the groundbreaking service and “our school was in both local papers for two weeks,” Gaertner reported, adding that the congregation “will celebrate with the school officially” during Sunday church services Nov. 18.

Official recognition — during which each blue-ribbon school receives a plaque and banner — is planned during a Nov. 12-13 event in Washington, D.C., scheduled to include workshops, panel discussions, addresses by USDE executives, and an awards luncheon.

Pflieger and Gaertner plan to represent their schools at the event in Washington, along with Anna Rickords, kindergarten teacher at Immanuel, and Salem’s Assistant Principal Larry Saalfeld.

For more information about the Blue Ribbon Schools program, including qualifications for applications and a timeline for the 2008 program, go to the CAPE Web site at www.capenet.org/brs2.html.