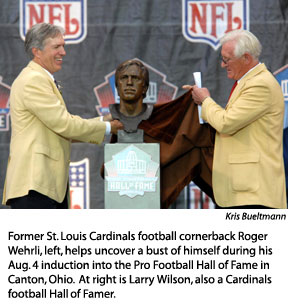 the Lutheran into the Pro Football Hall of Fame Aug. 4 in Canton, Ohio.

Wehrli, 59, is a member of St. Paul’s Lutheran Church in Des Peres, Mo. He retired from professional football in 1982 after playing 14 seasons with the Cardinals.

“Finally, many of you know me as a man of faith,” he told the thousands who attended the event and the millions more who watched it on their television screens.  “I believe that God has guided each and every move I’ve made.  He’s put the right people in the right places to bring me here, and I thank Him with all my heart for taking a little guy from a little town (King City, Mo.) with little dreams and making me fit to wear the title of Hall of Famer.”

Attending the ceremony along with Wehrli and his family — including his wife, Gayle, and daughter Shannon, son Michael, and three grandchildren — were more than 50 members of the St. Paul’s congregation.

“Obviously, you have to thank God for the talent He gives you in the area of athletics,” Wehrli told The Lutheran Witness.  “Sure, the coaches and your parents have a big influence on your life, but the bottom line is that it all comes from God.  That was important for me to say.”

See the story by Kim Plummer Krull in the September issue of The Lutheran Witness magazine.  Click here to read it online.