At the 2007 National LCMS Youth Gathering, July 28-Aug. 1 in Orlando, Fla., countless young people and adults slapped exhuberant high-fives with friends and strangers all over the Orange County Convention Center and elsewhere.

And in a quieter show of awe, thousands of cell phones rose spontaneously above heads at mass event 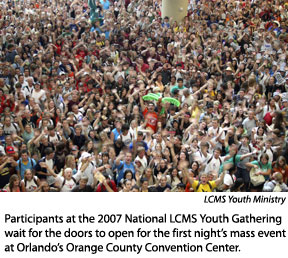 But from what participants have told or relayed to Reporter, this year’s Gathering is providing much more than memories of “snapshot” images like high-fives and flickering cell-phone screens.  For some, the experience was –- and continues to be — life-impacting.

This year’s Gathering, with some 27,500 youth and adults (counting volunteers and other behind-the-scenes workers), was the Synod’s 10th National Gathering since 1980.  All were sponsored by LCMS District and Congregational Services — Youth Ministry.

“As a DCE [director of Christian education], I have continually prayed that my youth would be touched by the National Youth Gathering experience,” Kristy Witek of Nederland, Texas, shared in an e-mail to LCMS Youth Ministry after this year’s Gathering.

“Never [before] have I had a youth in the middle of family group time tell me out of the blue that he wants to become a pastor,” Witek wrote.

Witek was one of five adults and 22 youth in Orlando from Holy Cross Lutheran Church, Nederland.  Often, such groups met during the Gathering 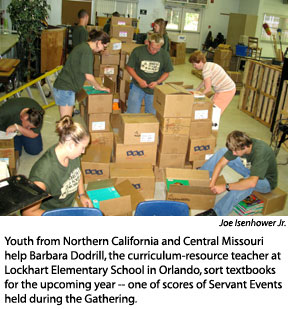 as a “family,” for group Bible study or discussion, for instance.

Witek later told Reporter that when she arrived back in Nederland at 2 a.m. on Aug. 2, she went to her MySpace page on the Web to see if any of her youth had posted bulletins about the Gathering.

She said she was surprised to see that several Holy Cross youth had already made entries “about how awesome the Gathering was,” posting comments like, “Just returned from Orlando.  I will never be the same.”

Witek also told Reporter that the Holy Cross youth group was planning a Gathering “reflection” worship service for later this month –- something they insisted on holding, even though she told the group it was not expected of them this year, since the congregation was currently involved in welcoming a new associate pastor and planning its 50th anniversary celebration.

“They are talking about how much they have changed through this Gathering,” Witek said of those youth, “not about the theme parks around Orlando.”  She added that other youth workers she has since talked with in Texas, Illinois, Wisconsin, and elsewhere share similar stories.

“I think the LCMS has some of the neatest teenagers in the world,” Dr. Terry Dittmer, director of LCMS Youth Ministry, told Reporter when asked to share his “lasting impressions” of the 2007 Gathering.  “They are courteous, Spirit-filled, Lord-loving, serving, caring, energetic, courageous, happy people.  They are passionate about God. They love their church. They truly enjoy each other’s company. God has given the LCMS some amazing gifts in our young people.  Our teens are the church with a smile on its face and the joy of Jesus in its heart.”

Adult leaders and Gathering planners also noted that workers with Orlando hotels, restaurants, and other businesses 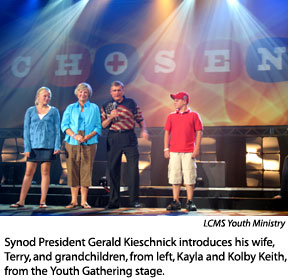 and services commented about “how impressed they were with our young people,” Dittmer said.

Several youth and adults with family groups at the Gathering told Reporter that they, too, were impressed — and grateful — that other adults plan and see to completion the National LCMS Youth Gatherings.

Jake Schwichtenberg, a first-time Gathering participant, told Reporter that “one lasting impression” he would have from the Gathering is that “adults care about our generation.  I hope they can keep doing Gatherings like this for many years to come.”

In Orlando with nine others from Trinity Lutheran Church, Morristown, Minn., Schwichtenberg said the Gathering “makes me realize how blessed we are to be in a church like ours.”

“A lot of adults have taken a lot of time to put all this great stuff together just for us,” said Christian McKean, 19, who also said that “sometimes, we forget they’ve pretty much been through everything that young people today go through.”

McKean said he is “especially grateful” for adult youth leaders in his congregation, Immanuel Lutheran Church, Memphis, Tenn., who “put in a lot of hours getting us ready for the Gathering.”

LCMS President Gerald B. Kieschnick, speaking at the July 29 mass event, mentioned an action of other adults — Resolution 2-05 of the 2007 Synod convention earlier that month in Houston, which delegates adopted 724 to 130.  The title of that resolution is “To Support National LCMS Youth Gatherings.”

“The focus of these National LCMS Youth Gatherings is on your relationship with the God of the universe,” Kieschnick told the audience. 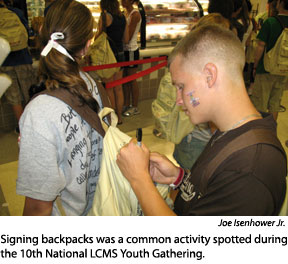 In service projects on which this writer went along, youth from Missouri and Northern California pulled weeds at one school and scrubbed outside walls at another — on a 90-plus-degree day — while others separated and organized boxes of textbooks for the new school year.

When asked what she thought about her textbook-separating duties, Richele Allen, with a group from Bethany Lutheran Church, Vacaville, Calif., said, “If Christ is in your heart, you can see even the most mundane task as Christian service.”

Donna Smith, the principal of that school, told Reporter that “it’s obviously in observing these young people that they place spiritual value in what they’re doing. They’ve certainly helped us immeasurably in getting ready fo