Five new “outreach centers for the blind” have opened this year, bringing to 54 the number of centers started by LCMS congregations in 23 states since 1999. 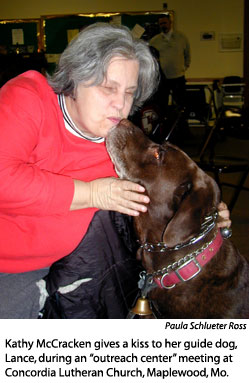 Started with the assistance of Lutheran Blind Mission, an LCMS ministry, the centers are designed to assist blind and visually impaired people by offering such things as computer training, lessons on reading braille, workshops on topics of interest, and weekly Bible studies.  They also typically offer a free meal once a month for attendees and their families.

While the centers offer practical living assistance, they are much more than “support groups,” according to Rev. Dave Andrus, executive director of Lutheran Blind Mission.  Their primary focus and goal, Andrus says, is to share the Gospel with blind people, since some 95 percent of the 12 million blind and visually impaired people in the United States are “unchurched.”

The centers, he says, “show and speak God’s love in a way [blind people] need” and help to “reconnect churches with people who are hurting in society.”

An outreach center at Concordia Lutheran Church in Maplewood, Mo., draws about 40 people to its monthly meetings.  Concordia Pastor Lew Ensor says the center has grown a lot since its first meeting in 2004, which drew just two blind people.  But, even with more than three dozen attendees today, “we really haven’t scratched the surface” considering the number of blind and vision-impaired people in the area.   “They are a vastly underserved community,” Ensor says.

The blind “are very isolated” and don’t get out much, and for some, “this event at Concordia is the only time they get out in a given month,” according to the pastor.

About 15 Concordia members provide transportation for attendees, who take part in a devotion, enjoy a hot meal, hear a presentation on a topic of inter 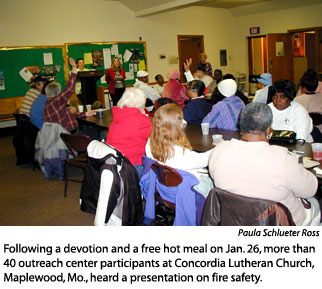 est to blind people — such as fire safety — and visit with one another.

Kathy McCracken, 56, was born blind and attends meetings with her guide dog, a chocolate labrador named Lance.  Even if a church volunteer couldn’t pick her up, she’d still somehow make it to Concordia, she says, because “I need the fellowship of being with people.”

The monthly meeting is “wonderful,” McCracken told Reporter.  “It gets you out of the house, you get spiritually uplifted, and I like meeting new people and just having fellowship with everybody.”

Danny Lawrence, a 37-year-old who was born with a detached retina and has been blind since 1982, says he tells every blind person he meets about Concordia’s program.  The only expectation of attendees, Lawrence says, “is to be a little bit closer to God and have a good time.”

“The caring and sharing that goes on here — both of God’s Word and [useful] information” and  “the fact that we can help each other,” is what draws Rhonda Dycus to the program.  It’s a “blessed outreach,” Dycus adds, because volunteers pick you up and take you home, so attendees “don’t have to worry about how to get there.” 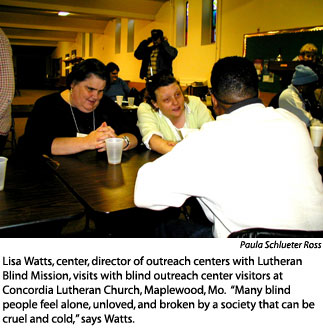 “Many blind people feel alone, unloved, and broken by a society that can be cruel and cold,” said Watts, who has some vision but has been legally blind since birth.  Congregations that operate blind outreach centers “reach out with love, compassion, resources, support, and, of course, most importantly, the unconditional love of Christ for each of us” and make a “dramatic difference” in peoples’ lives, she said.

Watts knows firsthand how the centers can bring people to faith: she became a Lutheran and joined Messiah Lutheran Church in Grand Junction, Colo., after becoming involved in its outreach center, now in its eighth year.

“I finally found a church where my beliefs fit, where I fit in, my home,” she said.