ST. LOUIS—In response to the Feb. 7 shootings at Kirkwood City Hall, Dr. Gerald B. Kieschnick, president of The Lutheran Church—Missouri Synod, has issued this statement:

“Last night at around 7 o’clock, a man shot and killed a Kirkwood, Mo., police officer outside the Kirkwood 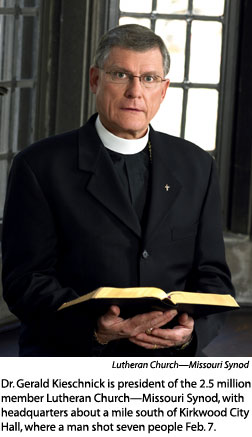 City Hall.  The man then entered the building, wherein a city council meeting was in progress, and shot six more people, killing four.  Among the dead were another police officer, two council members, and the city’s director of public works.  Two other people were wounded, including Kirkwood Mayor Mike Swoboda, who lies in serious condition at a local hospital.  The assailant eventually was shot and killed by other Kirkwood police officers.

“As many of you are aware, Kirkwood, a suburb of St. Louis, is the home of the International Center, the headquarters of The Lutheran Church—Missouri Synod. The site of the shootings, Kirkwood City Hall, is about a mile north of our offices.

“All of St. Louis is in shock today.  Our morning chapel service at the International Center was crowded.  Our workers mourned the dead and prayed for the city and especially for the wounded and the family members of the lost and injured. Members of the International Center family and local LCMS congregations are responding in care and support of people in the Kirkwood community.

“One Kirkwood citizen was quoted as saying that last night’s shootings ‘were like our own little 9-11.’  Then, as now, whether a tragedy involves thousands of deaths or six, it is hard to make sense of such events.

“What we do know is that even in times of tragedy, God, in His time, can and will make blessings arise through our Lord Jesus Christ, who gives hope to all who believe in Him through grace by faith.  With this sure and certain hope, 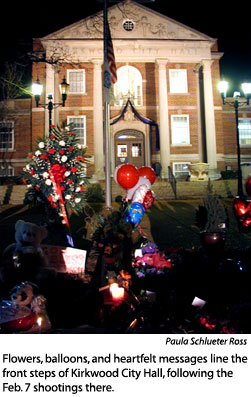 The Lutheran Church—Missouri Synod will be a witness to the Kirkwood community to the goodness of God in Christ Jesus, that in spite of this terrible evil, God promises to work good for all those who love Him (Rom. 8:28).”

None of the shooting victims is believed to be a member of an LCMS congregation.

Workers at the Synod’s International Center in Kirkwood met Feb. 8 in the building’s chapel for meditation and prayer.  Kieschnick read his statement (above) and said he has asked for a review of security measures and policies at the International Center to ensure the safety of employees.

The Synod placed a half-page announcement in the Feb. 10 issue of the St. Louis Post-Dispatch that expresses the church body’s “care and concern” and a Christ-centered “message of hope” to the Kirkwood community.  To read the message in its entirety, click here.