In the wake of the Feb. 7 Kirkwood City Hall shootings, The Lutheran Church–Missouri Synod has placed two half-page ads in St. Louis-area 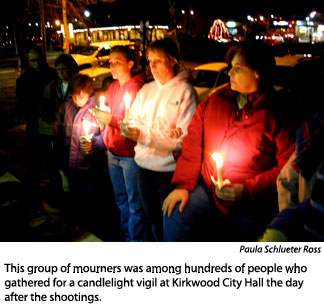 newspapers to encourage residents to look to Christ for healing.

The first ad ran in the Sunday, Feb. 10, St. Louis Post-Dispatch, the city’s only daily newspaper.  The second is scheduled to appear Feb. 15 in the weekly community newspaper, the Webster-Kirkwood Times.

Both ads carry the same message:

“In times of tragedy … hope remains in Christ.

“His love is here for you.

“Our prayers are with our neighbors in the Kirkwood community.

“A message of hope from The Lutheran Church–Missouri Synod.”

The ads include the address, telephone number, and Web address of the church body, which is located in Kirkwood just a mile from where the shootings took place.

Because of the Synod’s close proximity, “those who lost their lives or were wounded, along with their families, friends, and fellow citizens, are quite literally our neighbors,” said David Strand, executive director of the LCMS Board for Communication Services.  “We felt it appropriate, as a major spiritual presence in this community, to offer a word of comfort and support in the name of Christ.”

A day after the Post-Dispatch ad appeared, a few readers contacted the Synod’s International Center with positive comments, according to Joan Pogue, who receives phone calls for the Synod’s Church Information Center.

Pogue said she talked to one caller, who said he wanted to thank the church body.  “He was very impressed,” she said.  “He just thought it was wonderful that the LCMS cared enough” to place the ad.