“Christ, Our Hope for Unity” was the theme for an April 18 prayer service led by Pope Benedict XVI at St. Joseph Parish, a German Roman Catholic congregation in 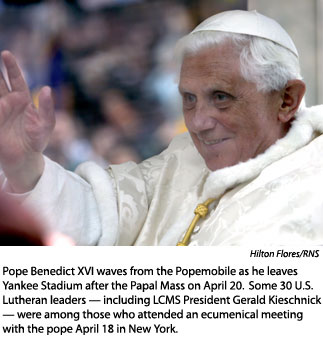 the Yorkville section of Manhattan, N.Y., with some 350 ecumenical guests in attendance.

Among the 30 Lutherans invited to attend this “ecumenical meeting” with the pope, as it was referred to in the invitation, were Lutheran Church–Missouri Synod President Gerald B. Kieschnick and Dr. Samuel H. Nafzger, one of the LCMS participants in the U.S. Lutheran-Roman Catholic Dialogue and executive director of the Synod’s Commission on Theology and Church Relations.  Also attending were local LCMS pastors and officials in New York City.

The service was led liturgically by Benedict XVI, who delivered the “Address.”  All worship assignments were carried out exclusively by Roman Catholics.  After the benediction, greetings were exchanged with the pope by 15 of the ecumenical guests — 11 were chosen from among national leadership participants, and four were from New York, including Dr. David Benke, president of the LCMS Atlantic District.  In his response to Benke’s greeting, the pope specifically requested, “Please greet all in The Lutheran Church—Missouri Synod for me.”

Nafzger said the Synod’s local and national leaders appreciated being invited to the ecumenical event.

“Especially meaningful,” he added, “was the inclusion in the worship program of the following quotation from the pope’s 2005 address at the World Youth Day: ‘Among Christians, fraternity is not just a vague sentiment … it is grounded in the supernatural reality of the one Baptism which makes us all members of the one Body of Christ.'”