MINNEAPOLIS — In a positive sense, it could be said that the ninth triennial Lutheran Education Association Convocation here April 24-26 was “all wet.”

For instance, its theme was “Fountains of Faith and Knowledge”; its 3,600 educ ators and other participants witnessed a baptism at the opening service and poured water they brought from home into a fountain pool onstage; and they heard major speakers address Scriptural references to water throughout the event.

The weather also was wet throughout — with a drizzle that turned to light snow. But the educators’ spirits were anything but dampened as they renewed long-standing friendships and made new ones; picked up resources in scores of sectional workshops, a huge display area, and a first-time “Technology Experience”; sang and listened to choirs of children and adults; and dined together at evening banquets.

During the first of those evening meals, Christian humorist Ken Davis no doubt drew tears of laughter from many, along with nods of recognition.

For the next night’s banquet, at each place setting was a BibleStick MP3 player and an MP3 CD introducing a new Bible-listening project for Lutheran schools titled “The Word Ablaze” –- courtesy of LCMS World Mission, LCMS District and Congregational Services – School Ministry, and Hosanna Ministries.

Dr. R. Reed Lessing, associate professor of Exegetical Theology and dean of the graduate school at Concordia Seminary, St. Louis, gave the convocation keynote presentation, drawing on the images of the river that the prophet Ezekiel saw as a sign of promise during the Babylonian captivity, as well as “the three splashes of water” of baptism.

“This water, when coupled with God’s mighty Word, is a baptismal river of life that forgives your filth, quenches you 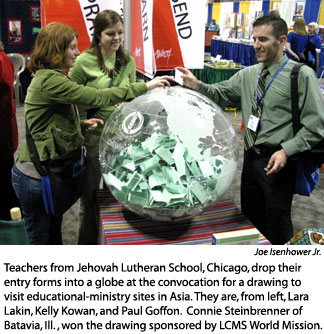 He recited a poem that refers to a student as “part of that great majority … who live their lives unnoticed in an average kind of hell.”

“But we are gathered around fountains of faith and knowledge,” Lessing said, “here to get renewed and refreshed and revived and reformed and recharged and reinvigorated by a river … a baptismal river of life that flows to us … and through us … to those ‘who live their lives unnoticed in an average kind of hell.’ “

He concluded by reminding educators that “Jesus’ death and resurrection guarantee that wherever the river flows, everything lives.”

Dr. John Nunes, president of Lutheran World Relief, Baltimore, and worship leader for the convocation, spoke of “unpredictable fountains” in the Gospel of John during the closing Communion service.  Nunes also baptized 7-month-old Westley Christopher Bergmann during the opening service.

Referring to the account of Jesus in the temple in John 7, Nunes said He “stands up … and brazenly says, ‘if anyone is thirsty [and] if there’s something missing in your life, something wrong at the level of your soul, believe in me and all things will be made eternally right. I will be the fountain of faith.’ “ 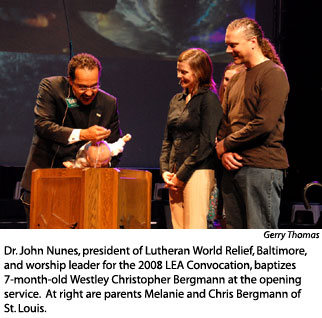 e believer’s heart’ from which flows rivers of living water.

“What have you got to lose?” he asked.

The offering at the opening service to support “The Word Ablaze” amounted to $9,314; and at the closing service, another to support LCMS Southern District education ministries affected by Hurricane Katrina reached $7,876.

Dr. Jonathan Laabs, LEA’s executive director, described the convocation as “the only event of such magnitude for Lutheran educators.”

He also thanked the 2008 convocation’s major sponsors — LCMS World Mission, Lutheran World Relief, and Thrivent Financial for Lutherans — as well as 17 other sponsors.

Laabs said that nine pre-convocation workshops Aug. 24 were “the most ever offered” and that extra efforts were made to line up a record number of exhibitors “so that everyone could maximize this single opportunity to have so many resources available for educators to take back home.”

An International Lutheran Education Symposium on April 23 — the fourth for an LEA convocation and the highest in attendance — involved 72 educators from eight countries.

“This is indicative of the growing year-to-year involvement from international Lutheran educators,” Laabs said. “It reflects a global perspective and how our organization is commited to that perspective

As the convocation came to a close, Reporter talked with two visiting Lutheran educators from Australia — Anne Maczkowiack, principal at Living Faith Lutheran Primary School in Brisbane, Queensland, and Steve Wilksch, principal of Redeemer Lutheran School, at Nuriootpa in the Barossa Valley of southern Australia, which he described as “like your Napa Valley.”

Both also were adding a two-week round of visits to Lutheran schools in various parts of the United States in conjunction with the convocation. Neither had visited this country before.

Noting that the first Lutheran schools in Australia were established by German immigrants in the early 1800s, Maczkowiack explained that Lutheran schools there today are supported through tuition and government funding, and that some schools even contribute to affiliated congregations to support their pastors.

“We’re accountable to government standards, although our teachers develop their own curricula,” she said, adding tha

Do your summer vacation plans include a Servant Event?