May 14 is the postmark deadline for congregations and their pastors to apply for grants of up to $45,000 each from the Lilly Endowment Inc. in its 2008 “National Clergy Renewal” program for pastors’ sabbaticals and for congregational “renewal.”

Over the past decade, the national program has awarded 1,014 such grants to provide support for pastors’ sabbaticals and “activities that enable the congregation as a whole to be renewed in its ministry” during that sabbatical.

Pastors and congregations work together to design their renewal programs, which must be described when they apply for the grants. Any Christian congregation served by a pastor with a master of divinity degree from a seminary accredited by the Association of Theological Schools is eligible to apply.

For application brochures and other information about the program, click here.

“Many people do not realize that part of a pastor’s calling … is to be spiritually growing all the time,” said Craig Dykstra, the Endowment’s senior vice president for religion. “Periodically, that requires an extended time away from the daily press of one’s usual responsibilities,” Dykstra continued.

“That’s where this clergy renewal program steps in,” he said. “It provides pastors the opportunity to work alongside their congregations to plan an 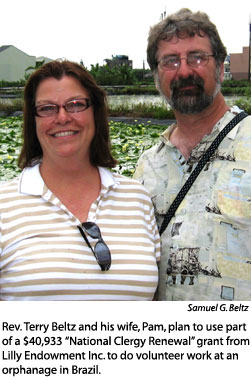 intentional time away for rest and renewal that will fit their own unique interests and needs.”

The list of congregations and pastors receiving the grants for 2008 is expected to be made public in October.

Trinity Lutheran Church, an LCMS congregation in Franktown, Colo., and its pastor, Rev. Terry D. Beltz, are among the 132 recipients of Lilly Endowment National Clergy Renewal grants for 2007.

That congregation’s grant of $40,933 — to be used by the end of 2009 — will allow Beltz and his wife, Pam, to teach and help with handiwork and gardening at Holy Trinity Institute, a self-supported orphanage in Brazil which Beltz toured several years ago with other pastors on a study tour with the Evangelical Lutheran Church of Brazil, an LCMS partner church.

The tour was sponsored by the Pastoral Leadership Institute, through which Beltz became aware of the Endowment grant.

“That will be my way of providing service back to an entity that receives children who are eventually allowed to be returned to their parents or placed into another caring home,” Beltz told Reporter as he explained that he was an adopted child.

The Beltzes — whose three children will eventually join them in Brazil to help at the orphanage — plan to be at Holy Trinity Institute for about 40 days — “a good biblical number,” as Rev. Beltz puts it.

After their return to the States, the pastor and his wife plan to rent a motor home, visiting for a month or so with congregations in western Colorado and eastern Utah “who have transitioned from medium-to-large-size, and find out how that process worked as they connected to their communities,” a situation and process which Beltz says applies to Trinity, Franktown. The congregation, with about 500 members, recently celebrated its 25th anniversary, as the pastor reached the same milestone in his ministry.

“The real goal for me will be to learn from others and to get a better idea of what mistakes to avoid and learn from,” he said.

And while the pastor and his family are away, plans call for the congregation to engage two groups of “The 72 … Partners on the Road,” an outreach ministry of LCMS World Mission that uses trained volunteers to work with congregations to help them start or shore up outreach ministry to unchurched people in their communities. (Click here for related story.)

“That’s all to foster a culture of outreach in our congregation,” said Beltz, who added that Trinity members will aim to conduct up to 25 “intentional outreach-focused events and ministries” during his time away.

All of those activities — from Brazil through the outreach training — will be funded by the Endowment grant.

Beltz described the grant application process as “very detailed, and a wonderful exercise to help the pastor and congregation think about priorities for the future.”

Since Trinity and Beltz were using the first of three tries allowed in applying for the grant, “we thought we’d just give it a shot, take the rejection humbly and graciously, and try again,” he told Reporter.

When they learned that their first application resulted in the grant being awarded, “we were amazed, surprised, and really grateful,” Beltz said.  “Now, with God’s blessing, we’re ready to make the best use of it.”

“What a great opportunity and real blessing for Pastor Beltz, the congregation he serves, and the Holy Trinity Institute in Brazil,” said Rev. David Muench, executive director of the LCMS Commission on Ministerial Growth and Support (CMGS).

“The positive value resulting from the pastoral sabbatical is gaining wider recognition among ministers and congregations,” Muench told Reporter.

Delegates to the Synod’s 2007 convention in Houston adopted Resolution 6-08 (680 to 59), which “encourage[s] congregations to provide professional church worker sabbaticals,” including consideration of “resources for developing sabbatical guidelines such as” those that “Wheat Ridge, Thrivent Financial, Louisville Institute, Lilly Foundation, as well as several of our LCMS districts” already have.

The resolution also calls on the CMGS to develop “model Synod guidelines for use in the Synod.”

“We consider the generous support of the Lilly Endowment and others to be critical in the development and implementation of guidelines at the local level,” Muench said.