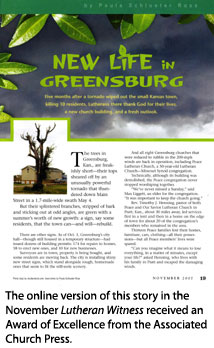 journalism competition for work done in 2007.

The awards were announced at the ACP’s annual convention, April 20-23 in Dallas.

The Lutheran Witness received the following awards in the ACP’s “Best of the Christian Press” competition:

The ACP is the oldest religious interdenominational press association in North America, with a membership of nearly 200 publications, Web sites, news services, and individuals.