“Open and collaborative discussions” between staff of LCMS World Mission and their counterparts in the Lutheran World Federation (LWF) have dispelled myths and opened the door to mutual understanding and a realization that the two organizations can work together for the common good, according to participant Rev. David C. Birner. 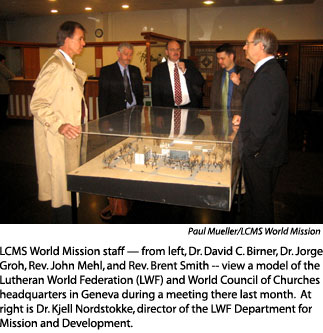 it was to explore “how can we — as people of God working with different perspectives in the same regions with many of the same people — talk and plan as each of us goes about proclaiming the message of salvation as we seek to improve the lives of people worldwide.”

They met with Dr. Kjell Nordstokke, director of the LWF Department for Mission and Development, and the department’s area secretaries for Africa, Asia, Europe, and Latin America and the Caribbean.  Some discussions also included LWF General Secretary Dr. Ishmael Noko.

“The visit to the LWF helped us to affirm the common strands of our identity in the Reformation, and that this identity needs to be constantly reaffirmed in so many different ways, including open dialogue between us and our partner churches,” Birner said.  “Our discussions were marked by mutual transparency, open communication, a spirit of collaboration, and open information exchange.”

The Geneva-based LWF represents 140 member church bodies in 78 countries, including a dozen of the Missouri Synod’s 30 partner churches.  Through its regional and international desks, the LWF Department for Mission and Development assists, coordinates, and accompanies member churches, their related agencies, and other bodies to develop and maintain holistic ministries that “affirm the church’s participation in God’s mission to all creation.”

Birner and Nordstokke acknowledged that doctrinal differences between the LCMS and LWF — such as women’s ordination — have resulted in strained relations between Lutheran church bodies.  They noted that while LCMS and LWF member churches affirm inclusiveness in c 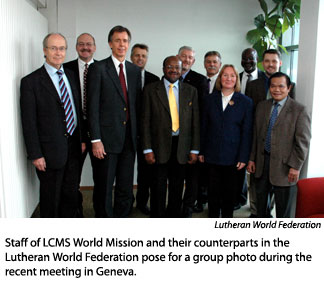 hurch life, they have different approaches and positions on the role of women in the church: the LCMS and its partners do not ordain women, while nearly 75 percent of the LWF member churches do.

But they also agreed that the two international mission entities have much in common and can work together on such issues as responding to the HIV/AIDS epidemic, preventing violence against women, promoting education and providing scholarships, addressing poverty, and working with people to improve their lives.

“The meeting has encouraged us to see Lutherans together becoming part of the solution to global issues,” said Birner.

Nordstokke said the two organizations have been working together since last fall to help resolve a 20-year-old conflict in the Lutheran Church in the Philippines (LCP), which is both an LWF member church and a partner church of the LCMS.

“The present process of reconciliation [in the LCP] has been strongly strengthened by the LWF-LCMS cooperation,” Nordstokke said.

“We’ve really discovered the strength of working together,” said Birner.  “In working with the LCP, we learned the value of talking and developing together one strategy for resolving this conflict.”

Dr. Jorge Groh, the Synod’s regional director for Latin America and the Caribbean, said he appreciated the opportunity to meet his LWF counterpart, as it gave them “the chance to talk  about the challenges and opportunities that the Lutheran churches are facing as they witness in Latin America — bringing hope, care and support.”

The meeting also gave LCMS World Mission representatives an opportunity to explain the Synod’s Ablaze! initiative to share the Gospel with 100 million people worldwide by 2017.

“This is the first time the people around that table understood the focus of Ablaze! — to share the Good News of Jesus,” said Birner, and they appreciated “hearing first-hand our vision for Ablaze! and seeing the passion our regional directors displayed in sharing that vision.”

Birner said he has invited the LWF mission team to meet again, at the LCMS International Center in St. Louis.

LCMS World Mission is anxious to work with other Christians “to address global issues that threaten to fragment our world today,” he said.  Although the Missouri Synod and Lutheran World Federation “come from different perspectives, we need to address the same issues.”