Judging from comments and the level of enthusiasm of Lutherans who joined tens of thousands at this year’s “March for Life” Jan. 22 in Washington, 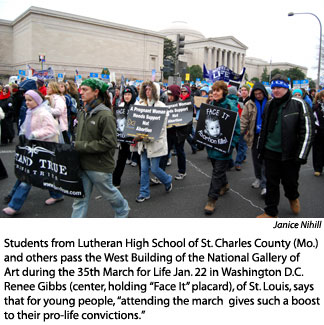 D.C., their resolve to end abortion may be buoyed by reports of abortion declines in recent years.

But they also say their quest is far from over, as they continue praying that God changes more hearts and minds, especially those of young people who face such decisions as ending unwanted pregnancies.

In the news last month was a report of the Guttmacher Institute, which found in a survey of abortion providers that 1.2 million abortions took place in the United States during 2005 — the lowest abortion rate since 1974.

LFL is a pro-life, pro-family ministry based in Nevada, Iowa, with the mission to “witness to the sanctity of human life through education based on the Word of God.”  It provides resources including Bible studies and information on an array of life issues; LifeDate, a free quarterly journal; and an annual national conference.

And just as it has every year since 1999, LFL invites people to gather under its banner for the annual March for Life marking the anniversary of the U.S. Supreme Court’s 1973 Roe v. Wade decision that legalized abortion. The 2008 LFL delegation included 50 marchers, who along with 50-some others started the day with a worship service at Immanuel Lutheran Church, Alexandria, Va., for which Lamb delivered the sermon.

“Sometimes it seems like death wins,” Lamb told those worshippers, citing examples of “society point[ing] the pregnant teenager to death through abortion … the chronically ill to death through embryonic stem-cell research … those with severe disabilities to death through euthanasia or assisted suicide … as something good that will help.”

“Not true,” Lamb said. “Life wins! … Jesus defeated our enemy — death … and gives us that victory. … The victorious message that life wins is tailor-made for addressing the life issues as they affect God’s people.”

That service and Lamb’s sermon were highlights of the day for Rev. Mark Luecke, a hospital chaplain from Canton, Ohio, who was in town for his second march.

“Dr. Lamb made it clear that abortion and other life concerns are not only moral issues, but spiritual issues,” Luecke said. “For me, participating in the march makes a statement that I — along with other Lutherans — have a strong, faith-connected commitment to life.”

The day also began with breakfast at the White House for about 200 march organizers, including Dennis Di Mauro, president of LFL’s Northern Virginia chapter and coordinator for the organization’s march-related activities.

President George W. Bush spoke during the breakfast, and later by audio feed to all the marchers gathered for a rally on the National Mall that also featured speeches from other government leaders.

“As I look out at you,” Bush said as he drew laughter from the White House guests, “I’ll see some folks who have been traveling all night to get here. You’re slightly bleary-eyed. I’ll see others who are getting ready for a day out in the cold.”

With temperatures in the 40s, thousands of marchers arrived in town after hours of travel via highways, rail, and air. Washington was overcast with periods of light rain that day.

“But mostly, I see faces that shine with a love for life,” Bush continued.

“I see people with a deep conviction that even the most vulnerable member of the human family is a child of God. You’re here because you know that all life deserves to be protected. And as you begin your march, I’m proud to be standing with you.”

“Today we’re heartened,” Bush said, “by the news that the number of abortions is declining. But the most recent data reports that more than one in five pregnancies end in abortion. America is better than this, so we will continue to work for a culture of life where a woman with an unplanned pregnancy knows there are caring people who will support her; where a pregnant teen can carry her child and complete her education; where the dignity of both the mother and child is cherished.

“We aspire to build a society where each one of us is welcomed in life and protected in law,” the President said. “We haven’t arrived, but we are making progress.”

Di Mauro said that the LFL march delegation this year came from at least nine states, and represented a range of ages, including some 30 who are college-age or younger.

He had arranged housing for many of them among  D.C.-area host families who opened their homes, and had coordinated local travel to and from the march sites, as well as meals and arrangements at Immanuel.

Di Mauro also said he would like to see more Lutherans march with the LFL delegation in years to come.  For information, contact him at dimauro.dennis@gmail.com.

“I was deeply moved by the thousands of people who showed up for the march on a cold, damp work day,” observed Jackie Vezina, a march participants with the LFL delegation for the first time, along with her husband of 35-plus years, Fred. They are members of Good Shepherd Lutheran Church, Florence, Ky.

She said a number of Roman Catholics stopped during the march to thank her — “a Lutheran, for participating in what seems to be a predominantly Catholic march. They hugged and thanked me for coming and showing that Lutherans support the sanctity of life too.  It was a very humbling experience for me.

“I only wish that more Lutherans could have been there to witness this amazing March for Life,” Vezina told Reporter.

“It is something of a relief to be in a place where you can ‘come out’ as pro-life without apology,” Rev. Matthew M. Hummel, an Evangelical Lutheran Church in America (ELCA) pastor from Bellmore, Del., wrote in an e-mail after he, his wife, and their two children marched with this year’s LFL delegation.

Hummel said that before their first march in 2005, he and his wife “would sit around and decry the fact that no one in the ELCA seemed to be doing anything. So we reached the conclusion it had to start somewhere with someone, so why not us.”

“The sight of the tens of