Before a devastating earthquake hit Peru on Aug. 15, 2007, staff of LCMS World Mission had considered the South American country as a likely spot for new mission work, perhaps within the next couple of years.

But, as the Missouri Synod reached out to quake victims there, helping them rebuild their lives, it has found a silver 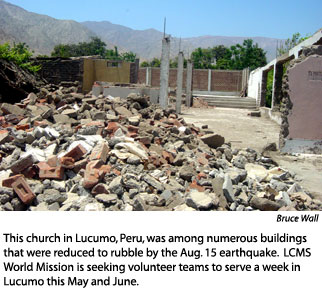 “This is something that God is leading beyond the vision we already had for Latin America,” says Dr. Jorge Groh, regional director for Latin America and the Caribbean with LCMS World Mission.  With God’s blessing, the Synod’s response to the earthquake essentially sped up the process of developing the outreach ministry in Peru, according to Groh.

“The plan for mission [in Peru] is already laid out by God,” he said.  The LCMS “vision was there, but the timing was determined by God.”

Groh and his wife, Olga, visited Peru in late August to survey earthquake damage and assess needs on behalf of LCMS World Mission and LCMS World Relief and Human Care (Olga serves the two entities as project management director for Latin America and the Caribbean).

Their visit focused on needs in the town of Lucumo, a community of some 50 families that was hit hard.  The Grohs handed out Bibles, food, and personal hygiene items; led devotions; got approval from local government authorities to continue work there; and sort of “adopted” the town as a site on which The Lutheran Church–Missouri Synod could focus its relief and outreach efforts.

At the time, Olga wrote, many of the people in Lucumo “were waiting for the devotionals and Bibles as much as for the food.”

The quake destroyed 80 percent of the homes in Lucumo, as well as a dam that supplies water to residents.  Since the community lacks the financial and human resources to rebuild the dam, LCMS World Mission and LCMS World Relief and Human Care are working together to fund the construction and provide the labor to complete the project (click here for related story). 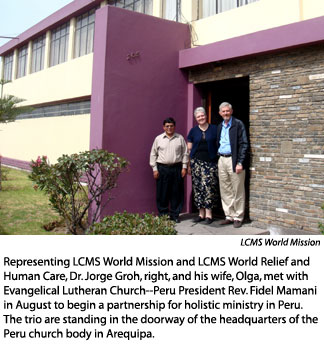 “a three-way holistic ministry” that will pursue “very intensive” church-planting and outreach in Lima and Lucumo.

Groh has met with IELP President Rev. Fidel Mamani and said Mamani is “very excited” about working in tandem with LCMS World Mission and LCMS World Relief and Human Care.

Plans call for placing two missionaries in Lima — one from the LCMS, the other from the Peru church — who could be serving in Peru by summer.  Their work would be both humanitarian and evangelistic, including “planting” two or three congregations and training national leaders.

Groh calls the three-way partnership “a beautiful relationship that’s evolving,” and stressed that it would make use of “resources that are already in the country,” such as members of the IELP.  Since September, the Peru church body has been a member of the International Lutheran Council, which includes the LCMS and 32 other confessional Lutheran denominations from Africa, Asia, Australia, Europe, Latin America, and North America.

Rev. David Birner, associate executive director of the International Mission Team for LCMS World Mission, told Reporter that “one of the most exciting elements of this new ministry opportunity is that it is built around partnership from the very beginning.

“As a result of the LCMS World Mission and LCMS World Relief response to emergency pleas from the village of Lucumo, plans developed quickly with the Evangelical Lutheran Church–Peru to work as partners in beginning new outreach in Lima and its surrounding areas.

“As we look to the future,” Birner added, “we see missionaries from the IELP working closely with us to plan and initiate new work.”