Rev. Jacob Harris has just one explanation for why he wasn’t killed during the civil war in his native Liberia, West Africa: “It was God’s grace.” 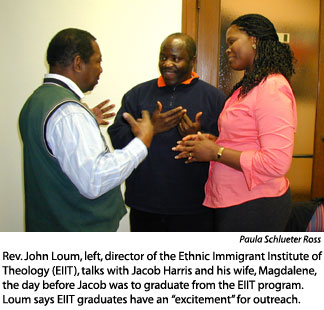 d, he says, and three times God saved him.

Now he is prepared to serve the Lord, he says, by preaching God’s Word to everyone, including fellow Liberians who have sought refuge in the United States.

Harris is one of 14 men who graduated Jan. 24 from the Ethnic Immigrant Institute of Theology (EIIT) — a distance-education program based at Concordia Seminary, St. Louis, that’s designed to prepare immigrants as pastors and deaconesses.

The program, initiated by LCMS World Mission in 2003, is a joint effort of the mission board, the seminary, and individual districts, which identify potential students and help pay their expenses.  (To read a related story, click here.)

This year’s class is only the second to graduate from the five-year-old program.  The first, in 2007, also had 14 graduates.

Besides Liberia, this year’s graduating class includes students from Ethiopia, Nigeria, Sudan, Haiti, and Korea.  Another 40 students — including two women who are preparing for deaconess service — remain in the EIIT program.

Students in the EIIT pastor program take a total of 15 Web-based courses while serving as lay leaders at their home congregations.  Most also support their families with full-time jobs while they are in the program, which takes about three-and-a-half years to complete.  Each is mentored by a local LCMS pastor and supplements his study by attending annual seminars on leadership, pastoral care, and world religions at the St. Louis seminary.

Upon completion of their coursework and vicarage, students receive first “calls” to their home congregations, where they lead worship services, administer the sacraments, counsel members, and assume all other duties of a typical Lutheran pastor.

EIIT Director Rev. John Loum describes the program as “missionary-based,” in that it emphasizes outreach and church planting, and says it reflects a variety of “ethnic flavors.”

Many EIIT students come from war-torn countries, where they “lost almost everything, but they have not lost their faith in Jesus Christ,” he said.  Because of what they have been t 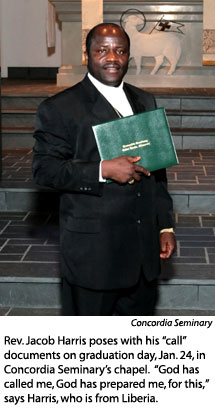 hrough, and because they are thankful to God for their lives and their new start in the United States, “it’s natural for them to share their faith,” according to Loum.

“These guys discovered the Lutheran doctrine, became impressed, and so made their way into the Lutheran church,” he said.  “They have a desire to reach out to their own [cultural groups]” and even “beyond their own people.”

Harris fits that profile.  In Liberia, he was Christian, but not Lutheran.  Within a year of arriving in the States in 2001, he was “brought to [Lutheran] faith” by leaders of a Liberian congregation in Landover, Md.

When Harris learned that God’s grace does not have to be earned but is free to all, “something amazing happened to me, and I want to share that — it is grace alone and nothing else,” he told Reporter the day before his graduation.

“After tomorrow, I will be the Rev. Jacob T. Harris, pastor,” he said, grinning broadly.  “I feel so wonderful for my calling.  Every time I preach, I feel the presence of God on my life.  It makes me feel so good to see myself making an impact in so many people’s lives.”

Having been there himself, Harris said, he knows what new immigrants are going through and how his congregation can reach out to them: first, help them with the basics, such as finding a job, and guide them through the immigration process.  After they are settled and have a connection to the church, “then you can explain the meaning of being a Lutheran,” he said.

“God has called me, God has prepared me, for this.”

Harris said he “loves the vision” of Ablaze!, the Synod’s effort to reach 100 million people with the Gospel by 2017, and says his “goal and desire is to open other churches.”

“That’s the purpose” of his training in the EIIT program, he said.  Harris has been called to serve as associate pastor at Lamb of God Lutheran Church in Landover Hills, Md.

Loum, an African immigrant himself, says EIIT graduates make great pastors because “they’re committed to Christ and they have an enthusiasm for mission, for the lost.”

They bring an “excitement” for outreach that isn’t often seen in traditional LCMS congregations, he said, adding, “Caucasian pastors call me almost every week to express their appreciation for these [EIIT] guys [who are] serving in conjunction with them.”

They are, Loum said, “a blessing to our church body.”