The Synod’s Council of Presidents (COP), meeting April 18-24 in St. Louis, Mo., and Fort Wayne, Ind., was the first of several groups to hear and respond to options for consideration from the Blue Ribbon Task Force on Synod Structure and Governance.

Synod President Dr. Gerald B. Kieschnick appointed the task force in 2005 to study, seek input, and make recommendations for consideration by the Synod regarding needed improvements in the structure and governance of the Synod.

In its report to the COP, the task force presented options under consideration regarding the number, function, responsibilities, and accountability for the following:

Information for the task force’s report was derived from comprehensive work that included interviews over the past three years with Synod board and commission chairs, executive directors, university and college presidents, seminary presidents, district presidents, pastors, and lay leaders.

The task force also will present its preliminary report to the LCMS Board of Directors members during the Board’s May 8-10 meeting.  The task force 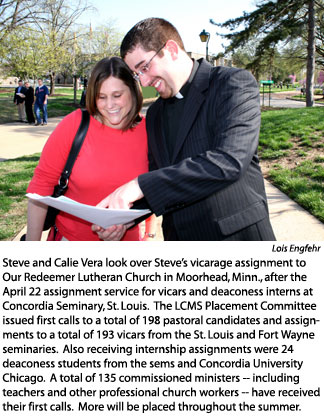 will give other reports to the participants of the Synodwide Theological Convocation in August, district boards of directors meetings in the fall, district conventions next year, and delegate caucuses early in 2010 — all of which will culminate in a presentation to the 2010 Synod convention in Houston.

Bible study and discussion of “Church and Culture” began the multi-site meeting of the Council of Presidents. The council started at a St. Louis hotel with placement interviews, moved to the LCMS International Center over the weekend, and on to the seminary campuses at St. Louis and Fort Wayne for services to mark the placement of vicars and candidates.

In a Bible study opening the COP meeting, Dr. Joel Lehenbauer said, “The church needs to be faithful to the ‘either-or’ truths of the Bible as well as to its ‘both-and’ truths. Scripture presents church and culture as a ‘both-and’ reality, which calls the church to be both ‘counter-cultural’ and ‘culture-friendly’ in appropriate ways.”

Drawing on passages from 1 John and 1 Peter, Lehenbauer, associate executive director of the Commission on Theology and Church Relations, said that the central message of Scripture — in Christ alone you are a “chosen people, a royal priesthood, a holy nation” — is radically and profoundly counter-cultural in obvious ways. He said the church seeks to deliver and embody this message in ways that not only challenge but also invite and engage those who so desperately need to hear it, and in ways that take into account distinctive cultural realities.

Lutherans are well-equipped in their understanding of “both-and” truths (e.g., Law and Gospel). Yet Lehenbauer noted that the church will always struggle with application.  “It requires constant discernment and we’re never sur 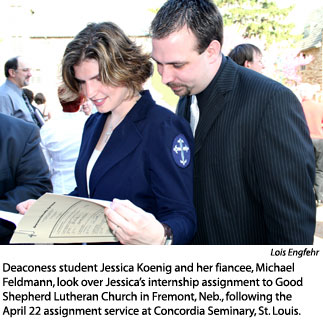 e we have it exactly right, precisely because it involves application to specific and differing situations.”

The study led to discussion of a letter on worship that the COP continues to refine.

The council also met with faculty at each seminary. The COP includes presidents of the 35 LCMS districts and the Synod president and vice presidents.

For congregations calling pastors to fill vacancies, the latest figure is 87 fewer than district presidents reported in February. For non-calling congregations, the figure is nine more than reported two months earlier.

The calls to fill vacancies included those issued to men who received their first calls during placement services April 22 and 23 at Concordia Seminary, St. Louis, and Concordia Theological Seminary, Fort Wayne, Ind., respectively.

Do your summer vacation plans include a Servant Event?