Lutheran Church–Missouri Synod missionaries returned to Kenya in early February to resume their work, just days after LCMS World Mission asked them to remain in Ethiopia after regularly scheduled meetings there.

The missionaries — Dr. Paul and Joy Mueller and Rev. Claude and Rhoda Houge — are stationed in Karen, a suburb southwest of Nairobi.  They were not 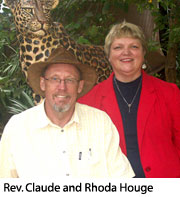 considered to be in danger during weeks of post-election violence early this year that led to the deaths of more than 1,000 people and the displacement of some 300,000, but were asked Jan. 30 to remain outside the country as LCMS World Mission re-evaluated the situation.

“The day the peace agreement was announced, everyone was so happy all over the country,” said  Rhoda Houge in a March 11 e-mail to Reporter.  “Co-workers said they didn’t get any sleep because people were celebrating all night.

“There are comments like, ‘Now we can begin the new year!’ and ‘This is the way Kenya is supposed to be — peaceful and working together,'” Houge said.  “There is a great sense of relief wherever you go, and everyone is hoping that this plan will work to keep things peaceful for the future.”

Also back in Kenya are Dr. Carlos Walter Winterle and his wife, Lidia, of the Evangelical Lutheran Church of Brazil, who are serving an international Lutheran congregation in downtown Nairobi on behalf of the LCMS and its partner churches in Brazil and Kenya.  The Winterles spent about a month in Brazil, and returned to Kenya Feb. 29.

Two LCMS short-term mission teams that had planned to serve in Kenya earlier this year postponed their trips because of the crisis.  Both are now making plans to serve there in April, and Houge said the missionaries “have been working with the leadership of the Evangelical Lutheran Church in Kenya [ELCK] to make sure that everywhere [the teams] are planning to go will be safe.”

Travis Torblaa, personnel care manager with LCMS World Mission, said he and other staff will do everything in their power to assure the continued safety of Synod missionaries in Kenya and elsewhere around the world.

“We are thankful that tensions in Kenya have dropped following a political agreement between President Kibaki and Mr. Odinga,” Torblaa told Reporter.  “We continue to monitor the situation and assess the risk level to our missionaries.  We pray for our missionaries and the ELCK, as they share the Good News of Jesus Christ with the people of Kenya.”