WITTENBERG, Germany — Establishment of a new Lutheran ministry center in this city most closely associated with Martin Luther and the Reformation m 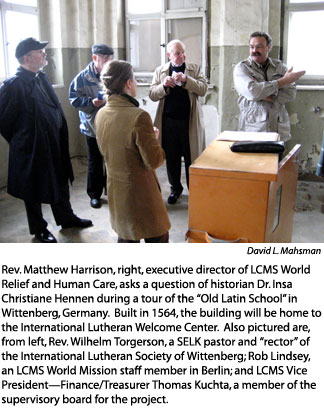 oved a step closer March 17 as the board appointed to supervise the project met for the first time.

During their time here, board members learned that the historic building purchased for the project arguably is the first structure in the world built to be a Lutheran parochial school.

Meeting here March 17 was the newly appointed board of the International Lutheran Society of Wittenberg (ILSW), a German non-profit organization created by the partners to operate what they agreed to name the “International Lutheran Welcome Center.”  The new society has been granted Recognized Service Organization status by the Synod’s Board for Human Care Ministries.

The project includes as a primary purpose re-establishment of an SELK congregation in Wittenberg and intentional Gospel outreach in a city that today may be only 15 percent Christian.

“After years of rule first by the Nazis, then by the East German communists, this city so important to the history of Christianity is no longer Christian,” said Dr. Robert M. Roegner, executive director of LCMS World Mission and vice chairman of the ILSW board.  “LCMS World Mission is involved in this project because we want to help share the Good News about Jesus with today’s residents of Wittenberg.”

Other aspects of the project include a bookstore, a welcome center for tourists, space for academic programs, and a human-care office.  To reflect the nature of the project, the board gave the International Lutheran Welcome Center what they called a “subtitle”: “Institute for Lutheran Studies, Mission, and Human Care.”

The project’s home will be the “Old Latin School,” a four-story building built in 1564 only steps from the Stadtkirche, or Town Church — also known as St. Mary’s Church — where Luther often preached.  Completion of extensive building renovations is expected in 2010.

Dr. Insa Christiane Hennen, a historian of Wittenberg buildings, told board members that Luther and his fellow reformer, Philipp Melanchthon, were involved in planning for the school, a high school for boys.  The faculty was under the supervision of the Lutheran pastor, she said.  Asked whether this would make the school the world’s first Lutheran parochial school, she agreed that it would.

In other matters at the organizational meeting, SELK Bishop Hans-Joerg Voigt, chairman of the ILSW board, reported that he will sign an agreement with the German territorial church of which St. Mary’s Church is a member.  The agreement outlines how the SELK and territorial church, which is in the union-church tradition, will relate to each other.  It calls for mutual respect and regular communication.

In addition to Roegner and Voigt, members of the board are Rev. Matthew Harrison, executive director of LCMS World Relief and Human Care; LCMS Vice President–Finance/Treasurer Thomas Kuchta; CPH President and CEO Bruce Kintz; SELK Propst (Vice President) Gert Kelter; and Ulrich Schroeder, a member of the SELK’s governing board and secretary of the ILSW board.  Kintz was represented at the meeting by Jonathan Schultz, CPH vice president and legal counsel.