He talks a lot about loving relationships and long-term commitments, but you wouldn’t call LCMS World Mission’s Bruce Wall a matchmaker for the lovelorn.

is a matchmaker, all right, but he’s more interested in hooking up LCMS congregations with overseas mission fields.

And he’s looking for 300 congregations to sponsor their own short-term mission teams between now and June 2010 because that’s how many “opportunities from the field” he expects to fill.

“Short-term” teams serve less than six months, typically a week or two, and are responsible for their own travel and housing costs, which range from $1,500 to $3,000 per person.

Wall said he hopes those “sending” congregations will share their love and develop ongoing relationships with the people they serve by responding to their specific needs, supporting them with prayer, and sponsoring teams on a regular basis for a number of years.

He’s confident, he added, that the overseas experiences also will “challenge and encourage” stateside Lutherans to serve more than once — perhaps even as long-term missionaries.

The program “is a great way for congregations to be involved in mission work,” he said.

Salem Lutheran Church in Tomball, Texas, has been sending short-term teams for 12 years to Honduras and Mexico, and since November to Kenya, East Africa.  In all, nearly 50 teams of 10 to 50 people each have taken part in the overseas ministries, which sponsor medical “clinics” in those countries, according to Kevin Pieper, Salem’s minister of missions and outreach.

“Our philosophy in Honduras is to make a long-term commitment (five years or so) to a particular city or region, and send mission teams there every six months,” Pieper told Reporter via e-mail.  Teams sponsored by the congregation include physicians, dentists, eyeglass personnel, and water-well drillers, as well as Lutherans and others who just want to serve.

“The Gospel [is presented] to every person who attends the clinic,” according to Pieper, and

during the week the group “will generally treat and witness to about 5,000 people.

“The Lord only knows how many people have come to faith as a result, but I can tell you that, without exception, every church we have worked with there is growing,” he said.

The relationship offers “huge benefits” to both sides — more worshipers for the receiving church, and the sending church “develops more of a ‘mission heart,'” Pieper notes.

And, “both sides develop respect and friendship for the other.”

Pieper invites other congregations to join Salem in its overseas mission work, and says the Tomball congregation is willing to help others get involved.

Jan Wendorf, president of the Lutheran Women’s Missionary League, says she’d like to see more LCMS women get involved in hands-on mission work as a way of “walking” with the Lord.  So Wendorf is challenging each of the auxiliary’s 40 districts to “send two short-term teams into the mission field by March 2010 to support our missionaries and partner churches.” 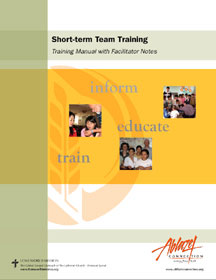 “Many of our districts have already done mission trips and will continue to provide this experience for our women,” she said.  “For over 65 years the women of the LWML have supported missions; this is one additional way to show our support.”

So far, LCMS World Mission has scheduled 29 groups for service this year, but many more opportunities are available.

In an effort to help congregations prepare their own short-term mission teams for overseas service, the mission board, Lutheran Hour Ministries, and LCMS World Relief and Human Care worked together to produce a DVD-based manual titled Short-term Team Training.