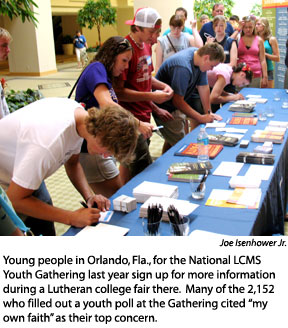 Gathering in Orlando, young people saw “my own faith” as their number-one concern.

Among other choices on their top-concerns list, they identified “terrorism” (9.4 percent) and “war” (7.9 percent).

Dr. Terry Dittmer, director of LCMS Youth Ministry, who released the poll results in late November, indicated that home-schooled youth who took the poll listed “boy/girl relationships” almost four times as often (34.4 percent to 9.4 percent) as “the general response” to their top concern.

The poll has been taken every three years at all 10 National LCMS Youth Gatherings since 1980. It is sponsored by Lutheran Youth Fellowship, the Synod’s national youth organization.

On where they go to school, 61 percent attended public high schools, 8.8 percent Lutheran high schools, 3.9 percent other private or parochial schools, and 1.5 percent indicated they were home-schooled (up from .4 percent in 2004).

More than three-fourths (78.3 percent) of all poll participants lived with both parents — “an amazing statistic,” Dittmer points out, “compared with national statistics, where youth living with both parents hovers at 50 percent.”

With church participation, 77 percent considered themselves to be active or very active, and 68 percent said the same of their parents.

On the other hand, 46 percent said they engage in very little or almost no personal Bible study and devotions — the same percentage reported in 2004. Dittmer said that figure has been consistent throughout the 27 years of Youth Polls.

On questions of behavior and morality, Dittmer released the following poll results:

“Youth appear to be trending with society and culture in general” on this matter, Dittmer said.  The  tally of those convinced that marriage is meant only for man and woman in 2004 was 70.5 percent, and 85.9 percent in 2001.

On matters of worship:

Concerning ecumenical matters, 17.5 indicated they think all religions are pretty much alike and 52.2 percent think all Christians should be able to worship together.

Global warming also was a new 2007 topic, with 42.8 indicating it to be a real concern, and just 12.5 percent rejecting the matter out of hand.

On the war in Iraq, 27.9 per-cent indicated total support for it — males more so at 38.3 percent, compared with females at 23.8 percent.  More than one-third said they supported the original invasion, but want a timeline for troop withdrawal.

With “life concerns,” 71 percent said they are pro-life, and 43.9 percent indicated that they favor the death penalty.

In a kind of straw poll for the 2008 presidential election, Dittmer reported that “other” was the clear winner, at 29.9 percent.  Barak Obama drew 18.5 percent of the total — the highest of any of the &nbs