All LCMS districts to convene this year

All 35 LCMS districts hold their triennial conventions this year — starting with North Dakota’s, Jan. 18-21 in Minot, N.D., and ending with Central Illinois’, July 5-7 in Springfield, Ill.

Reporter plans to carry a summary story on each convention, as space and deadlines permit, beginning with the North Dakota convention in the February issue.  District convention reports also 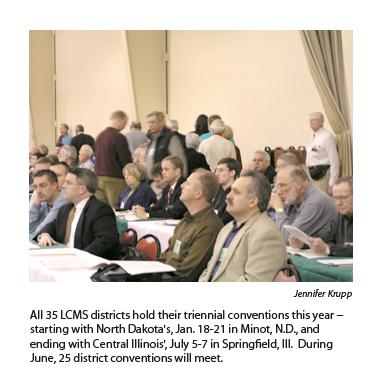 will be posted to Reporter Online as they become available.

Information for the convention summaries is provided by officers or communications staff in each district.

According to Bylaw 4.2.1 of the Synod’s Constitution, “Conventions of the districts shall afford opportunities for worship, nurture, inspiration, fellowship, and the communication of vital information.  They are the principal legislative assemblies, which amend the district’s articles of incorporation and bylaws, consider and take action on reports and overtures, and handle appropriate appeals.”

Each convention also will hold elections for president and other top officers.  Voting delegates are expected to elect at least seven new district presidents this year to succeed those planning to retire from service.  Those districts are North Dakota, Oklahoma, Florida-Georgia, Eastern, Northwest, Iowa East, and Michigan.

Each district convention also will hear a presentation on “Proposals and Possibilities” from the Blue Ribbon Task Force on Synod Structure and Governance.  Delegates will be involved in discussion about the task force’s report, and will be asked for their input.

To see a schedule of all 35 district conventions, visit www.lcms.org/?13104 on the Web.