Hempelmann directs ‘What A Way’ initiative

Dr. L. Dean Hempelmann — who was instrumental in forming the What a Way initiative to support recruitment and retention of Synod-rostered professional church workers — is now that initiative’s first director, on a part-time, deployed basis.

Hempelmann retired in 2007 from the position of executive director of the LCMS Board for Pastoral Education (BPE), in whi 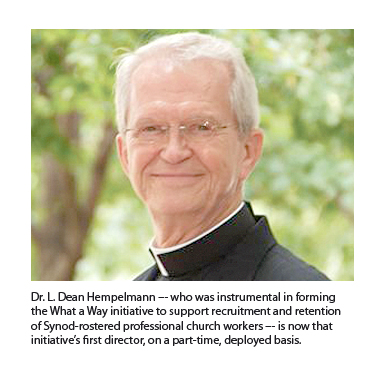 ch he had served since 2004.  He was the director of Pastoral Education for the former LCMS Board for Higher Education from 1999 to 2004, when the BPE was formed. Prior to that, he was president of Concordia Lutheran Seminary, Edmonton, Alberta (1993-99) and earlier was acting president and academic dean at Concordia Seminary, St. Louis. He also served as the pastor of congregations in Washington and Oregon. He now lives in Las Cruces, N.M.

While in the Synod higher-education post, Hempelmann was on the initial leadership team for What a Way after then-LCMS President A.L. Barry called for its formation in 2000.

The What a Way initiative offers resources specifically tailored to support professional church workers and encourage others to consider church-work careers. The initiative has received funding from two Thrivent Financial for Lutherans churchwide grants to the Synod — for 2007 and for 2008 — making possible Hempelmann’s directorship of the effort.

The current seven-member What a Way leadership/action team first met with Hempelmann Sept. 25 to “identify some specific targets as he works over the coming years to champion the initiative’s cause,” said Rev. David Muench, a member of that team and executive director of the LCMS Commission on Ministerial Growth and Support.

Hempelmann is “well respected in the Synod and has a long track record of healthy interaction with our workers,” Muench told Reporter.

Another member of the leadership team, Dr. Kurt Krueger, executive director of the LCMS Board for University Education (BUE), added that “no one is more qualified to direct What a Way than Dr. Hempelmann, by virtue of his wide ministry experience and his deep passion for recruitment and retention of professional church workers throughout our Synod.”

Krueger included in a report to his board the following projects and initiatives on which he indicated Hempelmann will “focus his energies”:

“The LCMS gets it!,” Hempelmann wrote in an e-mail to Reporter.  “As far as I know, we are the only Christian communion that maintains the dual focus in one mission: one — actively to recruit church workers and two — operatively retain our church workers. Our What a Way mission is a powerful influence toward a healthy life for our congregations and our workers in the years to come.”