Dr. Samuel Nafzger decided to wait some 10 weeks — until Epiphany Day (Jan. 6) — to formally present Synod President Gerald B. Kieschnick with the plaque for the Synod that he received Oct. 26 on Kieschnick’s behalf at the 50th anniversary celebration and worship service for the Lutheran Church in Korea, a partner church with the Missouri Synod. 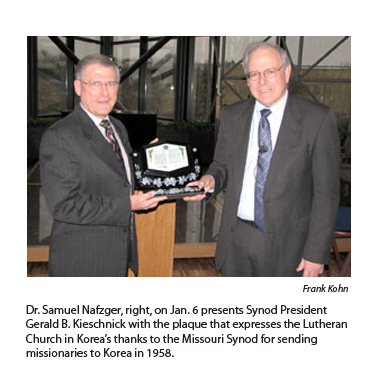 Nafzger, the Synod’s director of Church Relations-assistant to the president, explained that wait during the Jan. 6 chapel service he led at the Synod’s International Center in St. Louis.  At the end of that service, he made the presentation to Kieschnick.

“It seems to me,” Nafzger told worshipers, “that this plaque of appreciation symbolizes, on the Festival of Our Lord’s Epiphany, the primary reason for the existence of the Missouri Synod and this International Center.”

“What a wonderful privilege those of us who work here have in being a part of making the mystery of the Gospel known — that the baby born in Bethlehem is the Savior of the world.”

The plaque from the Korean church reads as follows:

“For this reason we give thanks to God first of all, and also to [the Synod], in this 50th anniversary year of Lutheran mission work in Korea.”

Nafzger and his wife, Janis, represented the Synod at the Oct. 26 celebration service, as guests of the LCK.  Kieschnick was in Austin, Texas, that day for the dedication of the new Concordia University Texas campus.

“The LCK anniversary does indeed remind us of one of the main reasons we exist as a church body — to carry the Gospel throughout all the world,” Nafzger later told Reporter.

As Nafzger stated in Seoul when he received the plaque, Gospel outreach in Korea grew out of the results of a field survey the Synod conducted in 10 Asian countries during 1951 and 1952.  He recounted that the 1953 LCMS convention authorized the Synod to enter Korea. And based on a report from the Synod Board of Missions, the church’s Board of Directors in 1957 adopted a resolution stating that “‘we want to develop almost immediately, with God’s help, an indigenous church in Korea.'”

Nafzger also pointed out that the LCMS Board’s resolution specifically noted that Dr. Won Yong Ji — a Korean clergyman who had received his doctorate at Concordia Seminary, St. Louis — was to serve from the outset with LCMS missionaries and others in establishing that indigenous church.

“Nothing quite like this had ever happened before,” Nafzger said to those gathered in Seoul. “Nowhere else had the Missouri Synod acted on the basis of such a clear plan of operation in mind as it did in beginning mission work in Korea.”

“And the rest, as they say, is history,” he told the Jan. 6 chapel worshippers. “On a cold and windy day in January 1958, three young missionaries by the names of Paul Bartling, Maynard Dorow, and Kurt Voss arrived at the airport in Seoul, Korea.” Ji would join them and their families later that year for mission and outreach work in his native land.

The LCK isn’t the only one of the 30 LCMS partner churches to celebrate a significant anniversary in recent years.  For instance, the India Evangelical Lutheran Church in 1995 marked 100 years since Synod missionaries had started work in that country — the first foreign mission field in the Synod’s history — leading to formation of an indigenous church in India in 1958.  Other such churches would form after Synod missionaries began work in their countries.

“Today, under the blessing of God, there now exists in Korea a church body by the name of The Lutheran Church in Korea,” Nafzger continued in his chapel message. “This church has 42 congregations, 53 pastors, and 5,060 baptized members. Through its work of conducting the Bethel Bible study program, this church has led 450,000 individuals and 15,000 clergy in this part of the world in study of the Bible. It has a university which includes a seminary, and it is presently building a 28-story skyscraper in the heart of Seoul that will be known as the Martin Luther Building.”

Nafzger explained that the LCK will lease space in that building to generate income for church operations and growth. He said that the Korean church’s plans for such growth — as outlined by LCK President Hyun-Sup Um in his anniversary message — include the goal of establishing 500 congregations in North and South Korea over the next 50 years.

Concerning the anniversary celebration service in Seoul last October, Nafzger noted that 1,700 people filled the auditorium where it was held, and all 53 pastors of the LCK were present, as were official representatives from all 42 congregations. It included “a stirring presentation by the enthusiastic young people of the church.” The program was emceed by a leading actor in Korea who has become an LCK clergyman.

“What a glorious occasion it was!” Nafzger said.