For Kathy Jones, taking two and a half days off work and spending nine hours riding a red-eye bus to Washington, D.C., proved well worth the “incredible experience” of joining what is believed to be a record number of fellow LCMS members at her first “March for Life.” 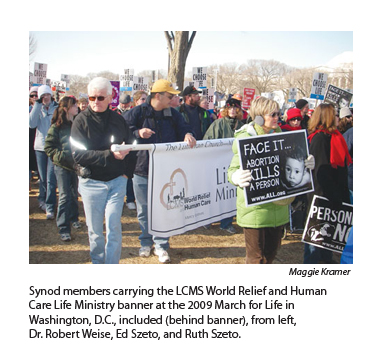 “It was uplifting to see so many people standing up for life,” said Jones, a technical editor and member of Shepherd of the Lakes Lutheran Church, Brighton, Mich. After years of talking about marching, Jones says she decided this was the year to participate

“It was awesome to look up, and all you could see was tons and tons of people in front and behind a flood of people. It made our hearts soar to think that so many people would take the time to take part,” Jones said.  “With [President] Obama taking office and the larger threat to various abortion laws, I think it’s important for people to show our support for the unborn and to raise our voices for those who can’t speak.”

Jones was one of thousands of pro-life supporters from throughout the country who trekked to the nation’s capital for the 36th annual march on Jan. 22, two days after the presidential inauguration.

The march observes the anniversary of the 1973 U.S. Supreme Court’s “Roe v. Wade” decision legalizing abortion in the United States.  Since the ruling, more than 48 million abortions have been performed in the United States, according to published sources.

As of Jan. 29, march organizers had yet to announce the official turnout, but estimated participation at between a record 300,000 to 400,000 people. Veterans said they had no doubt this marked a banner year for Lutheran marchers, who included Synod President Gerald B. Kieschnick. 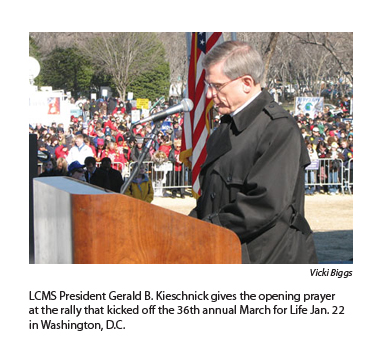 Just as they expressed concern about the new U.S. president’s views on abortion and embryonic stem-cell research, LCMS marchers also noted their joy in seeing their church body president kick off the pre-march noon rally.

“A great message and a great prayer” is how Eric Otten, a Navy pilot from Fort Worth, Texas, described Kieschnick’s prayer at the National Mall. A member of Christ Lutheran Church in Fort Worth and a march veteran, Otten said he was happy to join “the most Lutherans I’ve seen in four years.”

“In previous marches, a lot of people would come up and thank me for coming, and they would get excited because I was a Lutheran when most of the marchers were Catholic,” said Otten, who also serves on the Lutherans For Life (LFL) board of directors.

In the opening prayer at the March for Life rally, Kieschnick prayed “on behalf of all those whose lives are in danger because they are not afforded the basic protection to gaze upon that which all in this country should have the right to behold, namely ‘life, liberty and the pursuit of happiness.'”

Earlier in the day, the LCMS president also delivered the sermon at a service organized by LFL at Immanuel Lutheran Church, Alexandria, Va.  The service drew a record 160 worshippers, according to LFL, including many Lutherans who later marched through the Washington, D.C., streets.

Members of the LCMS Sanctity of Human Life Committee (under the auspices of LCMS WR-HC) also marched, including Dr. Robert Weise, Timothy Goeglein, and Dr. James Lamb.  After the march, Life Committee members met to discuss ways the Synod can become a more visible leader in the public square on life issues.

Lamb, who serves as LFL executive director, credited both Obama’s position on life issues and Kieschnick’s attendance with motivating more Lutherans to take a stand in the nation’s capital.  “It’s not enough to just nod our heads and say we are pro-life,” said Lamb, participating in his 10th March for Life.  “We have to put those words into action.”

Under a clear sky and enjoying milder-than-normal temperatures, Lutherans proudly waved the banners of LFL and LCMS WR-HC’s Life Ministry during the afternoon, 10-block parade.  Gridlock often made for more standing than marching, but Lutherans said they were pleased the large turnout would send a strong affirmation about the blessing of God’s gift of life.

The event drew many first-time marchers, including Sarah Schultz, a junior at Concordia University Wisconsin in Mequon. Schultz drove one of two vans packed with 17 Students for Life members.  This was the group’s third march and largest participation.  Schultz made this year’s march a priority to support “those who don’t have anyone to speak out for them unless we do.”

“There won’t be a lot of pro-life push, as far as the (U.S.) president goes,” said Schultz, who called the march “even more than I expected.”  “It was definitely neat to go to church in the morning and hear President Kieschnick and then for him to give the opening prayer (at the pre-march rally),” she said.  “Next year, I’d like to see even more high school kids, college students, and young adults get involved.  We need to get something started to see even more Lutherans at the march to honor the sanctity of life.”

The LCMS president agreed.  Heading toward the steps of the U.S. Supreme Court building for the march finale, Kieschnick reflected on the many LCMS members who took time off from work and classes to show their respect for life.  He said he was proud that “so many of our LCMS people care enough about this cause to spend their own time and money and energy to come here today.”

“This has been a wonderful experience, and I’m hopeful it will be an encouragement to more of our pastors and more of our members to speak the truth in love and to speak out unapologetically about the God of our universe who created life and who wants us to support life in all its stages, from the cradle to the grave,” Kieschnick said.