The joint project in Wittenberg, Germany, of the LCMS and its German sister church entered a new phase July 22 with the appointment of a new manag 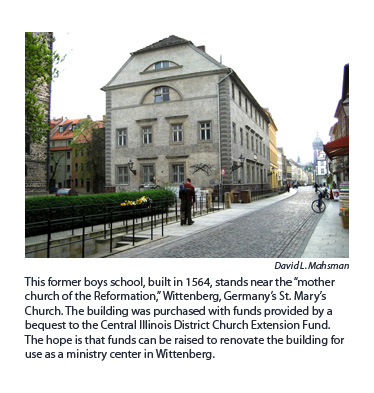 ing director and election of a new chairman for its supervisory board.

Meeting in Wittenberg, the supervisory board of the International Lutheran Society of Wittenberg (ILSW) named Rev. David Mahsman to succeed Dr. Wilhelm Torgerson as managing director. Torgerson, who is retiring, will serve in the post through August. Mahsman will take up his new duties Sept. 1.

The board also elected Dr. Samuel H. Nafzger to be its new chairman. He succeeds Bishop Hans-Joerg Voigt of Germany’s Independent Evangelical Lutheran Church (SELK).  The ILSW’s Wittenberg project is jointly operated by the SELK and the Missouri Synod.

After serving four years as assistant to the executive director of LCMS World Mission, Mahsman began serving July 1 as director, special assignments, Eurasia, for LCMS World Mission. He will continue in that post as well. Nafzger is assistant to the LCMS president for church relations. He formerly was executive director of the Synod’s Commission on Theology and Church Relations.

to this project,” Nafzger said. He added that the Synod, its president, and the LCMS Board of Directors support the project.

Nafzger noted that the dual actions — choosing a new chairman and new managing director — were taken “at the encouragement of the SELK and with its full support.”

The ILSW owns a historic 16th-century school building near St. Mary’s Church in Wittenberg. Reformer Martin Luther, who was a theological professor in Wittenberg, preached frequently at the church.  It was on the door of another Wittenberg church, the Castle Church, that Luther posted 95 theses for debate in 1517, an action regarded as the spark that ignited the Reformation.

The ILSW was formed by the LCMS and SELK to operate a welcome center for visitors to the Luther sites, to re-establish a SELK congregation in Wittenb

erg, and to carry out other work.

“Both of our church bodies believe that it is important that our churches and the theological confession for which we are known around the world be represented in Wittenberg, the birthplace of the Reformation,” Nafzger said. “We look forward to working together with the other churches present in this place where Dr. Martin Luther lived, taught, and confessed the Scriptural Gospel of salvation for sinners by grace alone, through faith alone, on the basis of Scripture alone, in Christ alone.”

Voigt said he stepped down as chairman of the board “to advance this important project, putting the leadership into the hands of our American brethren. I consider Dr. Sam Nafzger to be ideally suited for the position of chairman. He will be able to call upon his vast experience as the long-time executive secretary of the International Lutheran Council (ILC) and as one of the leading theologians of the LCMS.”

“I pledge to continue to support his work in behalf of the Wittenberg Project with all my heart, a project not only meaningful but necessary,” Voigt said.

SELK and the LCMS are members of the ILC, a worldwide association of 34 Lutheran church bodies.

Torgerson expressed high regard for his successor’s background, noting especially his years of service as a church jou

rnalist. He said this would serve Mahsman well, especially as Wittenberg prepares for the 500th anniversary of the Reformation in 2017. He added that he stands ready to offer the new managing director any assistance needed.

Mahsman, 58, was for 20 years the Missouri Synod’s director of News and Information Services and executive editor of its two official periodicals, Reporter and The Lutheran Witness. He is a 1983 graduate of Concordia Theological Seminary, Fort Wayne, Ind., and earned a master of sacred theology degree at Concordia Seminary, St. Louis.

“I am looking forward to getting to know the Wittenberg community and its leaders, to developing many positive relationships, and finding ways to implement the goals that led to the founding of the ILSW by our two church bodies,” said Mahsman, who plans to move to Wittenberg in September.

The ILSW was established as a German non-profit organization in 2007 to operate the Wittenberg project on behalf of the SELK and LCMS.